Going to the theater is a treat that never grows old for me. Here are some of the plays I’ve seen recently, most of which were excellent.

This is a captivating production and a perfect example of the rich quality of Chicago storefront theater. Great direction, great acting, great staging. It’s a 70-minute play and you will enjoy every minute. Here’s how my review begins:

“If this doesn’t sound like a promising start for a night at the theater, The Drowning Girls at Signal Ensemble Theatre will quickly change your mind. The play is a beautifully performed, balletic story of an English serial killer in the 19th century, who swindled from and then drowned his three wives. Actually, it’s the entrancing story of the three wives, who perform all the parts in the play from the brides submerged in their tubs to the husband(s), parents, lawyers, judge, reporters and scrubwomen.”

You can see The Drowning Girls through June 6. Signal is at 1802 W. Berenice, near the intersection of Irving Park and Ravenswood. See my review for details.

Three Sisters at The Hypocrites

Anton Chekhov’s Three Sisters gets an excellent production from the always-interesting Hypocrites. It’s a fairly traditional staging except the color palette is used in a very inventive way. Director Geoff Button adapted the script to use more contemporary language without trivializing it. My review describes the story this way: 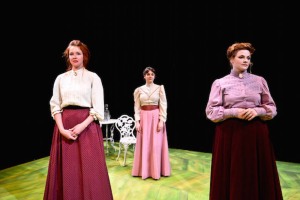 “The eponymous Prosorov sisters lead the excellent 14-person cast in a story that progresses over several years in a provincial Russian town at the turn of the 20th century. The sisters, all in their 20s, yearn to move back to Moscow, which they left 11 years ago when their father assumed the command of a brigade in the rural area. Now their father is dead and the town (and their social life) is dominated by the presence of the military base and its officers.”

The play is 2 hours, 20 minutes, and runs through June 6 in the Hypocrites’ new space at the Den Theatre on Milwaukee Avenue in Wicker Park.

Side Man at American Blues Theater

This is a fine production of Warren Leight’s Tony-award winning play, Side Man. It was first produced at Steppenwolf in the 1999-2000 season and I tried to keep that excellent production out of my thoughts and not let it affect my review of this production. This is a memory play about the jazz musicians—trumpet players—who were riding high in the 1940s and ‘50s before the rise of rock and roll. The story focuses on the career and family of one particular side man. His son takes us back and forth in time from the moment his parents met through their present difficult period.

Side Man runs two hours and continues through May 24 at American Blues Theater, staged at the Greenhouse Theater Center on Lincoln Avenue. There’s live jazz played on stage before the performance begins.

Between You, Me and the Lampshade at Teatro Vista 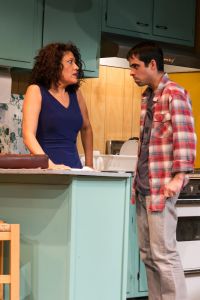 This new play about immigration and family issues by Raul Castillo runs through this Sunday at Victory Gardens/Biograph Richard Christiansen Theater (the upstairs space at VG). The 100-minute play (with one intermission) is well written with lively dialogue. My Gapers Block review says:

“Between You, Me and the Lampshade is an entertaining and poignant story told by an excellent cast under the capable direction of artistic director Ricardo Gutierrez. Original music and sound design by Victoria Deiorio create an authentic sound landscape for the story. Jose Manuel Diaz-Soto’s scene design is very much an aging trailer interior, including the turquoise kitchen.”

I recommend it. Take Mom on Sunday. Or take yourself.

Ghost Gardens, a new play by Steven Simoncic, explores “how people in a dying community fight to overcome grief, illness, hopelessness, and air poisoned by a giant local corporation.” The play, set in Detroit, has certain charms and a couple of good performances, but it can’t overcome the fact that the script is rambling and disjointed. I wish I could recommend it. My Gapers Block review is here.

Ghost Gardens continues through May 31 at Chicago Dramatists on Chicago Avenue near Milwaukee.

The Herd at Steppenwolf Theatre Company

The Herd by Rory Kinnear is a story about several generations of an English suburban family who have a severely disabled child. The play looks at how different generations deal with the issues of parenthood and disability. Frank Galati directs an excellent cast of mostly Steppenwolf ensemble members, including John Mahoney, Lois Smith, Molly Regan and Francis Guinan. The writing is witty and tender and gets to the heart of these family matters. I didn’t review this, but you can check out other reviews here.

Running time for The Herd is 100 minutes. You can see it—and you should—until June 7.

Theater update: Three you can see

It’s theater season again and I have three new reviews that you’ll be interested in. Plus a special tip on what to see in the future.

9 Circles takes us  through the depths of Dante’s Inferno by telling the story of an Iraq war veteran who is accused of a terrible crime. The play presents a series of two-person scenes between the ex-soldier and a series of helpful or surreal professionals. The  story moves from accusation to trial to execution. The play is gripping, intense and discussion-provoking.  It’s a terrific performance by Andrew Goetten, who plays the ex-soldier, and by the other actors in multiple roles.  You can read my Gapers Block review here.

The photo at left is the one I reference in the first paragraph of the review. The photo is from the @historyinpix Twitter page and titled “Soldier in Vietnam, 1965.” Click to enlarge it and read what the soldier has written on his helmet.

This is a lively musical biography but of course the underlying story is tragic.  Hank Williams was a brilliant country-blues singer/songwriter in the

1940s and early 1950s.  He influenced many performers who followed him and the play suggests how he was a link to the African-American blues musicians of the period. His life was cut short at the age of 29 because of his addictions to alcohol and prescription drugs.  The ABT play does a good job of telling both the tragic story and making you happy to hear a healthy setlist of Williams’ songs. The band (Williams’ Drifting Cowboys) is made up of some excellent Chicago musicians and Matthew Brumlow as Hank comes close to channeling his image,  his voice and musical style.  Read my Gapers Block review here.

This is a witty and fast-moving play about corporate raiders in the late 1980s. You remember them, don’t you? Michael Milken, Victor Posner, Carl Icahn?  The financial crisis of five years ago this month has brought other corporate names to the forefront. Jamie Dimon, Richard Fuld and Hank Paulson; companies like Lehmann Brothers, Bear Stearns and AIG. So the raiders and their takeovers seem a bit dated now.  Nevertheless, this is an interesting and entertaining play and I recommend it. Ben Werling is terrific as Larry the Liquidator. Think of it, as I said in my Gapers Block review, as a drawing room comedy of the 1980s.

The National Theatre of London broadcasts live performances of some of its productions to theaters around the world, similar to the Metropolitan Opera Live in HD broadcasts.  NT Live broadcasts a live performance and several encores at the two Northwestern University theaters in Evanston,  at the Music Box in Chicago and Renaissance Place in Highland Park.

Last week we saw the final broadcast of the commercial, West End production of The Audience by Peter Morgan. Helen Mirren stars as Elizabeth II of England and some talented actors as her various prime ministers over the years. The play is a series of scenes, in random, not chronological, order, in which Mirren ages or reverses her age with very quick changes of wig and costume. It’s brilliantly acted and riveting as it takes the viewers through historical events of Elizabeth’s long career.  Her first audience was with Winston Churchill in 1952 and the latest with David Cameron in 2012.