Theater update: Three you can see

It’s theater season again and I have three new reviews that you’ll be interested in. Plus a special tip on what to see in the future. 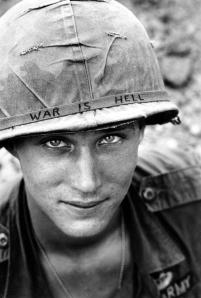 9 Circles takes us  through the depths of Dante’s Inferno by telling the story of an Iraq war veteran who is accused of a terrible crime. The play presents a series of two-person scenes between the ex-soldier and a series of helpful or surreal professionals. The  story moves from accusation to trial to execution. The play is gripping, intense and discussion-provoking.  It’s a terrific performance by Andrew Goetten, who plays the ex-soldier, and by the other actors in multiple roles.  You can read my Gapers Block review here.

The photo at left is the one I reference in the first paragraph of the review. The photo is from the @historyinpix Twitter page and titled “Soldier in Vietnam, 1965.” Click to enlarge it and read what the soldier has written on his helmet.

This is a lively musical biography but of course the underlying story is tragic.  Hank Williams was a brilliant country-blues singer/songwriter in the 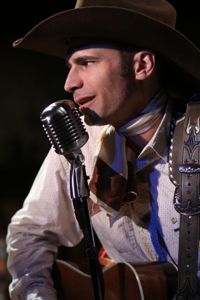 1940s and early 1950s.  He influenced many performers who followed him and the play suggests how he was a link to the African-American blues musicians of the period. His life was cut short at the age of 29 because of his addictions to alcohol and prescription drugs.  The ABT play does a good job of telling both the tragic story and making you happy to hear a healthy setlist of Williams’ songs. The band (Williams’ Drifting Cowboys) is made up of some excellent Chicago musicians and Matthew Brumlow as Hank comes close to channeling his image,  his voice and musical style.  Read my Gapers Block review here.

This is a witty and fast-moving play about corporate raiders in the late 1980s. You remember them, don’t you? Michael Milken, Victor Posner, Carl Icahn?  The financial crisis of five years ago this month has brought other corporate names to the forefront. Jamie Dimon, Richard Fuld and Hank Paulson; companies like Lehmann Brothers, Bear Stearns and AIG. So the raiders and their takeovers seem a bit dated now.  Nevertheless, this is an interesting and entertaining play and I recommend it. Ben Werling is terrific as Larry the Liquidator. Think of it, as I said in my Gapers Block review, as a drawing room comedy of the 1980s. 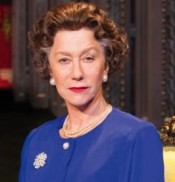 The National Theatre of London broadcasts live performances of some of its productions to theaters around the world, similar to the Metropolitan Opera Live in HD broadcasts.  NT Live broadcasts a live performance and several encores at the two Northwestern University theaters in Evanston,  at the Music Box in Chicago and Renaissance Place in Highland Park.

Last week we saw the final broadcast of the commercial, West End production of The Audience by Peter Morgan. Helen Mirren stars as Elizabeth II of England and some talented actors as her various prime ministers over the years. The play is a series of scenes, in random, not chronological, order, in which Mirren ages or reverses her age with very quick changes of wig and costume. It’s brilliantly acted and riveting as it takes the viewers through historical events of Elizabeth’s long career.  Her first audience was with Winston Churchill in 1952 and the latest with David Cameron in 2012.

3 Comments on “Theater update: Three you can see”