Six things you didn’t know you missed in Gapers Block

I love writing for Gapers Block. It gives me an excuse to view, think and write about some of the things I love—like theater, art, architecture and design. So here are some things I’ve been writing about recently. You can still catch some of them.

The Six Corners Association partnered with the American Indian Center to create a piece of art to celebrate the contributions of Native Americans to the history of the community, which is part of the larger area known as Portage Park. The sculpture titled Portage by artist Ted Sitting Crow Garner is being dedicated at 12 noon Saturday, October 12, at the Six Corners Sears store at the intersection of Cicero, Irving Park and Milwaukee.

Here’s a photo from a slideshow charting the progress of the sculpture.  Garner is shown putting it into position on the west side of the Sears store.  Image courtesy Six Corners Association.

See my preview here, which includes some of the history of the neighborhood.

In my high school years, I worked at a chain woman’s clothing store on Cicero Avenue across from the Sears store, so I feel a pride of ownership in my old neighborhood.

Even if you miss the dedication, you can drive by and check out the sculpture later.

A collection of brightly colored figures has taken up residence at Pioneer Court Plaza, formerly the site of the Marilyn Monroe figure. They’re part of Chicago Ideas Week and created by Chicago artist Hebru Brantley, who is the Chicago Ideas Week 2013 Artist in Residence. Read about them here. They’ll be in place at least until October 20.

I wrote recently about the excellent Bauhaus exhibit at the Ukrainian Institute of Modern Art.  The institute recently unveiled its new exhibit, Artists Respond to Genocide, which enables artists to take a broad look at genocide over the last century. The exhibit is made up of paintings, drawings, photography, sculpture and assemblages by 20 local and international artists. Many of them are really gripping, such as the large brightly colored painting by Mary Porterfield titled Engraved, or the woodcut and intaglio prints by Harold Cohen titled Auschwitz, Baba Yar and Genocide. The exhibit recognizes the Holodomor or secret holocaust in the Ukraine in 1932-33 as well as the appalling list of genocides over time. A chilling list in the back of the exhibit program enumerates 13 of them, with the number of fatalities in each.

I wrote a preview of this exhibit for Gapers Block. You can see the exhibit until December 1 at this excellent small museum at 2320 W Chicago Ave.

The image is the Stanley Tigerman-designed facade of the building.

You can tour Wright’s Unity Temple

It’s been some time since formal tours of the landmark Frank Lloyd Wright structure, Unity Temple in Oak Park, have been available. Up until now, the only way to see the interior of this innovative building was if you knew someone or by chance went to a program there. (I’ve done both and even happily went to several services with friends. Even an avowed atheist will do anything to see the interior of a famous religious structure.)

I’ve seen and reviewed many plays in the last month, but one of the very best was this amazing three-actor blend of monologues produced by Interrobang Theatre Project at the Athenaeum.  Here’s how my Gapers Block review started:

“Mark O’Rowe is one of the new generation of Irish playwrights whose work was first seen in the 1990s. In Terminus, being presented by Interrobang Theatre Project, he displays his fascination with language and his passion for words. Terminus isn’t so much a play as a series of stories, intertwined in monologues by three characters, known only as A, B and C. Their stories, set in the streets of Dublin, begin separately, and gradually become more connected, until they are finally merged in a glorious fantasy of blood, sweat, tears and sex.”

Truly, this was one of the finest nights of theater I’ve seen lately. Unfortunately, the play closed last week.

The Benchmark at Step Up Productions

I also reviewed this play about a well-read homeless man and although the lead actor’s performance is excellent, the play as a whole was somewhat flat.  I wanted desperately to love it, but couldn’t. But tastes vary and other viewers might well enjoy it. Read my review here and then check out other reviews here.

How I spent my week…theater, art, music

A great theater experience, plus some cartoon art and memories of the Bauhaus. The finishing touch was a Steve Earle concert.  Am I lucky to live in Chicago or what?

Mark O’Rowe is one of the new generation of Irish playwrights whose work was first seen in the 1990s. In Terminus, being presented by Interrobang Theatre Project, he displays his fascination with language and his passion for words. Terminus isn’t so much a play as a series of stories, intertwined in monologues by three characters, known only as A, B and C. Their stories, set in the streets of Dublin, begin separately and gradually become more connected, until they are finally merged in a glorious fantasy of blood, sweat, tears and sex. That’s how my review of Terminus begins.  It’s a terrific play with thrilling language.  Truly a treat to listen to. I recommend it highly.

Daniel Clowes is a well-known graphic novelist, who has published nearly 50 books and magazines. Modern Cartoonist: The Art of Daniel Clowes is his current exhibit at the Museum of Contemporary Art, which runs until October 13.  The show is beautifully designed and curated and has many lovely little graphic surprises.

It was very interesting to see the progression and process of Clowes’ work, sometimes from sketch through inking and printing.  For some publications, a series of pen and ink on tissue pages was shown. Since so much art today is created on the computer, it’s fascinating to see so many of Clowes’ pages drawn by hand on paper.

Image: Collection of Daniel Clowes. Courtesy of the artist and Oakland Museum of California

Chicago’s Bauhaus Legacy at the Ukrainian Institute of Modern Art 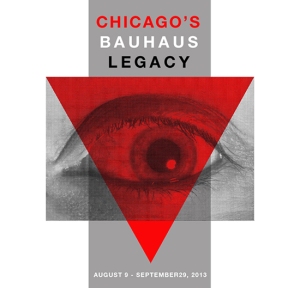 It’s been years since I visited this little gem of a museum on Chicago Avenue in Ukrainian Village.  Do not think it’s only about Ukrainian art; it’s really a center for modern and contemporary art.  The Bauhaus exhibit is fabulous and it’s open through this Sunday, September 29. If you are interested in modernism, you don’t want to miss it.

The legacy starts with Lazslo Moholy-Nagy moving to Chicago to establish the US version of the famous German citadel of design.  The Bauhaus’ existence was threatened in the 1930s by Hitler’s aversion to modern art. Moholy-Nagy was followed by other artists and designers who moved to Chicago (including Mies van der Rohe). The New Bauhaus went through many name changes and locations and in 1949 became part of the IIT Institute of Design.

The exhibit includes about 150 pieces by 90 artists and designers.  Work includes painting, sculpture, photography, architecture plans, furniture and design pieces.  A lovely example of the latter is a bar of Dove soap, designed by three students in 1952 as part of a special project funded by Lever Brothers.  Dove still uses the same shape for its soap bars.  (The original carved wooden prototype is on show at the Chicago History Museum.)

In addition to the main exhibit in the west gallery, the east gallery includes Bauhaus work from the institute’s permanent collection. There’s also a very interesting wall that shows the birth and development of the Ukrainian institute.

I’m going to write a feature on the institute for Gapers Block and I’ll provide a link to it here when I do.

Steve Earle at the Vic 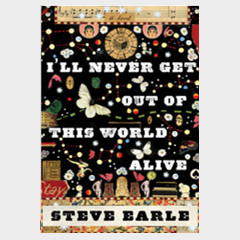 Steve Earle and the Dukes played a great concert at the Vic Saturday. The setlist included many of his fine old songs as well as tracks from his new album, The Low Highway. His band is made up of four musicians: a drummer, upright bass player, lead guitarist and fiddler/mandolin player.  Earle plays a number of stringed instruments himself (guitar, mandolin, banjo) and sings lead vocals. Many of his songs (and his occasional patter between songs) involve social commentary.  Here are a few lines from the song “The Low Highway.”

Heard an old man grumble and a young girl cry
A brick wall crumble and the white dove fly
A cry for justice and a cry for peace
The voice of reason and the roar of the beast
And every mile was a prayer I prayed
As I rolled down the low highway.

His novel–I’ll Never Get Out of This World Alive–is on my reading list and coming up soon.