Weekend update / no apologies to SNL

Suggestions for two new art installations to explore and some thoughts on reading.

New art and music on the State Street median 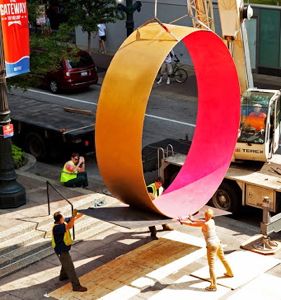 I wrote about the new State Street plaza in June when the public space on the State Street median opened. This pleasant parklet is still there, between Wacker Drive and Lake Street.

Tables and plantings create a place where you can read a book with your lunch or meet a friend for coffee.

Now there’s a new piece of sculpture at the south end of the plaza, created by Dusty Folwarczny.  I updated  the story about the plaza  in Gapers Block this week.

If you’re out and about Saturday morning, you can stop by  Irving Park Road and Keeler Avenue for the dedication of the new mural celebrating the Old Irving Park community. You can read my story about it in Gapers Block. Artist Tony Sparrow led a team of artists to create the mural on both walls and all the pillars in the Metra/Union Pacific underpass just west of the Kennedy Expressway underpass. Tony was a delightful host when I visited last week to interview him and tour the neighborhood. (The image shown is a small portion of the mural; thanks to Tony for the image.)

The mural is a world skyline titled Positive Babel: The World Lives, Works and Plays in Old Irving and celebrates the residents of some 70 ethnicities who live in the neighborhood. Old Irving is generally bound by Pulaski Road and Cicero Avenue east and west and Addison Street and Montrose Avenue north and south. The Old Irving Park Association has been working for the last 10 years to improve the neighborhood environment and one of its projects has been turning underpasses into art galleries. The Positive Babel murals are the 10th and 11th created.

If you want to explore the murals on foot, there’s easy street parking on Avondale just east of the Positive Babel underpass.

Reading on the CTA Redux

Some time ago, I wrote about how I like to spy on what people are reading on the CTA. I said I never go anywhere without something to read because you never know whether the bus will get stuck in traffic or whether your lunch date will be running late. I complained about how anonymous e-readers keep me from spying on book covers (and I admitted that I read all formats—print, phone, Kindle and iPad).

Now here’s Transit Readings, a fun site where the blogger thrives on photographing people as they ride and read their books, real books.  Sometimes the bus or rail line info is included too.

And here he explains what’s he’s doing and his rules for doing it. If you’re reading a book on the Blue Line or the #36, you may find yourself here.