Molière to Levon on stage & screen

More theater suggestions, one from a Gapers Block review, plus two music films. My rock and roll and film commentary is coming back. I’m working on something now about rock lyrics — and an essay on art and fashion is on the horizon.

Not only is the Court Theatre’s new play showing in Hyde Park, Court’s home territory. Director Charles Newell has set this new production of Molière’s marvelous Tartuffe in modern dress in Hyde Park/Kenwood. (His name was really Jean-Baptiste Poquelin; Molière was his stage name.) The delicious touch is that Newell has cast the same ensemble of actors, mostly African-American, to play Tartuffe as performed The Misanthrope, the first play in the Court Molière Festival. Tartuffe is the religious fanatic hypocrite who almost takes over Orgon’s family and wealth.

The acting is superb and the cast does a splendid job with Moliere’s witty dialogue. The mansion setting and contemporary costuming are beautiful … with the possible exception of Mariane’s and Valère’s outfits. Mariane, Orgon’s daughter, wears some silly-looking pink frocks (to emphasize her youth?) while Valère, her love interest, wears shorts he would never wear on the streets of Hyde Park and a White Sox cap that doesn’t know where to go.

The two-hour-plus-intermission play is immensely entertaining. The translation by poet Richard Wilbur is the gold standard and isn’t hurt by some modern interpolations. The Tartuffe run ends this weekend.

Beaten at The Artistic Home

Beaten is a new play by Scott Woldman at The Artistic Home, a storefront on Grand Avenue. It’s a family drama about three generations of women living in the same home and provides meaty roles for Kathy Scambiatterra, Kristin Collins and Kathryn Acosta as grandmother, mother and daughter. 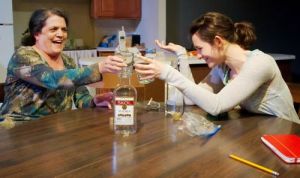 “Put three generations of women in a house together and you’re sure to have an eruption of personalities; eventually, long-kept secrets slip out and lies are undone. Beaten, a world premiere drama by Scott Woldman, gives the Artistic Home actors a searing and emotionally charged script, and they all come through with fine performances.”

I also noted that the play “was inspired by a 2009 workshop at Chicago Dramatists where female actors expressed their dissatisfaction with the lack of challenging parts for women; when asked to name their dream roles, all named parts written for men. Playwright Woldman listened.”  (Photo courtesy of The Artistic Home; Scambiatterra and Acosta.)

20 Feet From Stardom is about the mostly anonymous female backup singers behind some of the greatest bands of the 20th century. The 90-minute film directed by Morgan Neville features singers such as Darlene Love, Merry Clayton and Claudia Lennear, plus interviews with some of the musicians they performed with. It’s at the Landmark Century Centre Cinema now but it’s probably one of those films that will disappear from theaters after a short run. 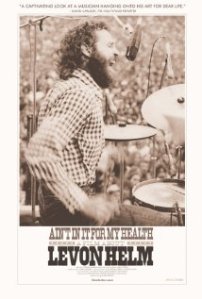 Ain’t In It for My Health is a film about Levon Helm, the late great drummer and singer with The Band. You’ve heard him on songs like “The Weight” and “The Night They Drove Old Dixie Down.” Levon died last year of throat cancer and was a musician until the end although he lost his voice in 1998. His Midnight Rambles at his home and studio in Woodstock, NY, were famous. The Levon film had three showings at the Music Box last month and I missed all of them so now I have to find it elsewhere or wait for the DVD to be released.

You can find Levon’s music on levonhelm.com and if you want to see him in top form, watch the 1978 documentary The Last Waltz, directed by Martin Scorcese.

I love you, Palladia

Palladia, you made my day, vastly improved my week, and cemented your position as the greatest TV network ever tonight.  You are showing — back to back — Hard Rock Calling 2012 and that fabulous concert film by The Band, The Last Waltz.

Hard Rock is a 2.5-hour version of the music festival in Hyde Park, London, last June. The performances are not shown in setlist order but edited to one or two songs per band in rotation.  Several songs of Bruce Springsteen were shown at various points and the film ended with Paul McCartney joining Bruce and the E Street Band for “I Saw Her Standing There” and a rousing version of “Twist and Shout,” which ended the festival.  And took place just before Live Nation (not the London police) famously shut down the concert because it was past curfew.

The Last Waltz was the final performance of The Band at the Winterland Ballroom in San Francisco in November 1976, directed by Martin Scorsese. For me, the highlight of this film is always seeing the late Levon Helm in his prime, singing and drumming.  His voice was powerful and betrayed a bit of his Southern background.  (Helm continued performing — and drumming — until his death last April.) The other band members, by the way — Robbie Robertson, Rick Danko, Richard Manuel and Garth Hudson — were all Canadians.

Not only is The Band in fine form, but they are joined throughout the concert by various special guests — Muddy Waters, Eric Clapton, Bob Dylan, Neil Young, Dr John, Van Morrison, Joni Mitchell, Emmylou Harris and the Staples Singers, among others.

Hearing The Band and Levon perform “Up on Cripple Creek,” “The Weight,” and “The Night They Drove Old Dixie Down” tonight really was soul-satisfying.

Palladia, by the way, is an HD network owned by MTV.  Look for it on your cable system. If you love rock and roll like I do, it will make you very happy.