What to Read Now: Three Books About the Plague 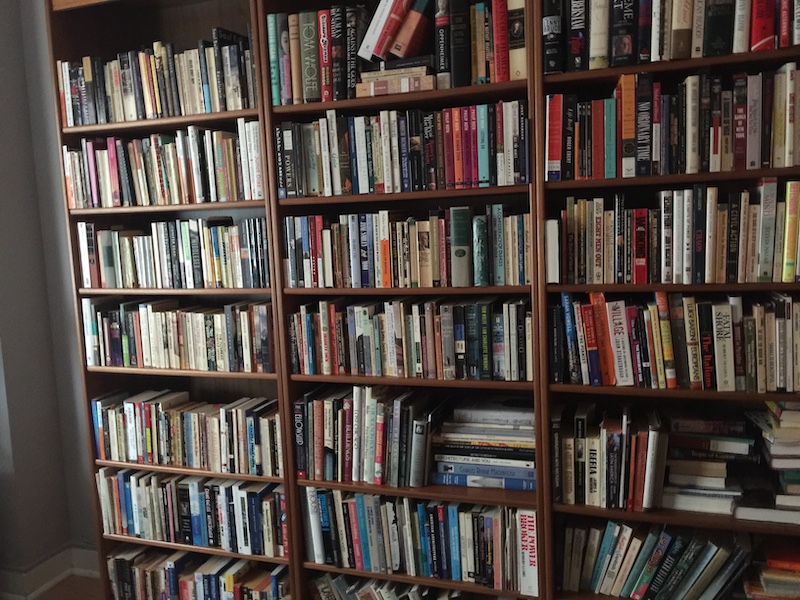 Half of my bookshelves. More shelves or fewer books? What a dilemma.

This essay was previously published at Third Coast Review.

It’s the year of the big virus. We’ve had two weeks of #StayTheFHome or sheltering in place, depending on where you live. And in some states, you’re not doing that. You’re going about your regular daily business, going to parties, bars and beaches and getting infected or infecting others.

But enough with the happy talk. Let’s talk about death—or at least, about plagues. Three books about plagues are on my mind now. I just finished Rebecca Makkai’s novel The Great Believers, an intense story about the HIV/AIDS epidemic in Chicago in the 1980s, blended with some of the same characters’ lives 30 years later. Right now, I’m in the middle of a 17th century plague story, Daniel DeFoe’s A Journal of the Plague Year, about one man’s experiences during the bubonic plague in London in 1665. And coincidentally (as if preparing for this) I recently reread Albert Camus’ The Plague, about a plague in 1940s Algeria. Little did I know how relevant that plague would be, both in disease form and as a political allegory.

The Great Believers is a totally engrossing novel with beautifully drawn characters—like Yale Tishman, a fundraiser for an art museum, and Fiona Marcus, sister of Yale’s best friend, Nico, the first in their circle to die from HIV/AIDS. Yale is a vividly drawn character and we follow his life as he breaks up with his partner Charlie, who was unfaithful and contracted HIV/AIDS. Yale is tested and finds out he’s ok, so he continues his work, which focuses on acquiring the art collection of an elderly woman (Fiona’s Aunt Nora) who was a model and muse in 1920s Paris. He also carefully continues his social life in the lively 1980s gay community in Chicago. So his career flourishes as the carnage of AIDS grows around him. Ultimately, he’s not careful enough.

The chapters about Yale in 1980s Chicago alternate with chapters focusing on Fiona in 2015. She’s in Paris, trying to reconnect with her daughter, who left home for a cult and then moved to Paris with her boyfriend. We first met Fiona as the teenager who tried to take care of “her boys”—Nico, Yale and their friends. She’s now a middle-aged woman. Her friend in Paris is Richard Campo, a photographer who recorded Chicago gay life in the 1980s whose work is now being celebrated with an exhibit at the Pompidou.

In one of my favorite passages, Fiona arrives in Paris, which reminds her not only of Aunt Nora but also of Yale. “Fiona builds that tie when she thinks in the present: ‘that a French café would have Wi-Fi seemed wrong. In her mind, Paris was always 1920. It was always Aunt Nora’s Paris, all tragic love and tubercular artists.’ She also thinks about Nico who died in the 1980s: ‘The other fantasy was the one where Nico walked beside her everywhere, wondering what the hell things were. He was Rip Van Winkle, and it was her job to explain the modern world, explaining things like ‘a firewall for your cloud,’ while she imagined him saying to her, ‘You’re living in the future.’”

The Great Believers will keep you involved in the lives of its characters—and if you’re a Chicagoan, you’ll love the references to people and places from three decades ago. It’s the sort of book that you will be sorry to finish, ev en if the ending is bitter sweet.

If I was writing a full review, I’d give it four stars. The book won many awards and was a finalist for the Pulitzer Prize for fiction in 2019. Rebecca Makkai lives in Chicago and Vermont. Her other works are the novels The Hundred-Year House and The Borrower, and the short story collection Music for Wartime.

The Great Believers is available from your favorite bookseller.

Daniel DeFoe’s A Journal of the Plague Year, written by a citizen who continued all the while in London, has always been referred to as a novel, but it reads as a documentary-style recounting of events around the bubonic plague in 1665 London. DeFoe, who was five years old at the time of the Great Plague, published the book in 1722. The style is not journalistic, as the author writes as an observer and sometimes as a participant, but he writes what purports to be an eyewitness account. The book most likely was based on the journals of his uncle, who lived in London at the time.

The plague arrived in England from Holland between September and November 1664. The anonymous writer is an upper class person, with a wife, children and servants. His brother tries to persuade him to go to the country to escape the plague, as many wealthy people did. But he determined to stay in London.

The disease began in a distant neighborhood and as cases began to increase, it moved throughout London. It was incredibly contagious and many houses were filled with sick families, with crosses on the door to warn of illness. People died, screaming, in the streets. As the deaths mounted in 1665, the city, unable to deal with all the corpses, dug a great pit to burn or bury the bodies.

Throughout the book, the author comments on the behavior of his fellow citizens, their uses of fortune-tellers and astrologers to know their fate, their visits to all sorts of doctors and healers who assured protections from or cures for the plague. Once the fever reached a peak, he reports many crimes and thefts from homes of sick people by looters and by nurses and other caretakers. They would enter the home of the dying and dead, strip the bodies of clothes and steal household goods and valuables.

The observer points out that the infection generally comes in to the houses of citizens through their servants, who they send up and down the street to obtain food and other household needs. He says that at one point he began trying to list the deaths of all officials (but not “the inferiors”) in September but found it impossible for “a private man to come at a certainty in the particulars.” But “when the violent rage of the distemper of September came upon us, it drove us out of all measures.” By the end of the plague, 100,000 souls were swept away, the author says, “yet I alive!”

A Journal of the Plague Year has no compelling characters or contemporary drama; in fact, it’s somewhat dry. But it is interesting to read for the observer/author’s views on the behavior of citizens, both healthy and infirm, and the development and progress of the plague.

Daniel DeFoe wrote novels including Robinson Crusoe and Moll Flanders and several hundred other works. The book is available as a free e-book from various booksellers and on public domain sites like Project Gutenberg. 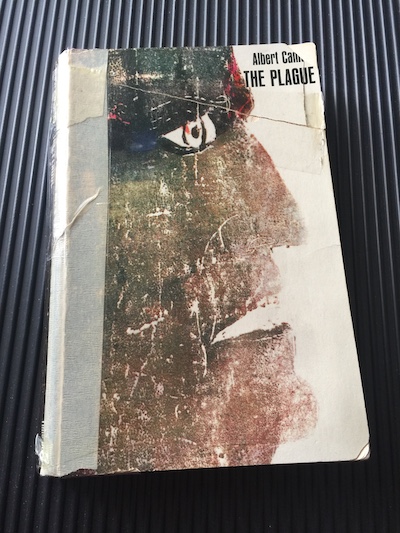 My taped-together copy of Camus’ The Plague.

The drama in Albert Camus’ 1947 novel, The Plague, starts with the rats. First a dead rat on the staircase at Dr. Rieux’s office, then a second one that evening outside his apartment. The rat “moved uncertainly … then moved forward again toward the doctor, halted, then spun round with a little squeal and fell on its side. Its mouth was slightly open and blood was spurting from it.” Then there were a few dead rats, then a dozen, then a column down the street, then a pile of dead bleeding rodents. For some reason, most people in the town thought little of this.

As people begin getting sick, Dr. Rieux treats the first victims, soothes their fevers and lances the pus from their “buboes” or abscesses. (The source for the term bubonic plague.) He works long days, making house calls on his patients. Dr. Rieux’s wife, who has been sick for a year, has gone to a sanitorium. The doctor is at first reluctant to call the fever a plague, but eventually decides that it is.

A meeting is called at the Prefect’s office, with a few doctors and bureaucrats attending. They discuss the situation and what to call it, Dr. Rieux points out that he has had a laboratory analyze the pus of the “buboes” in his patients and found it to be a slightly modified version of the plague bacillus. Most of those present want to avoid use of the word plague; the doctor says he doesn’t care what it’s called, as long as something is done to prevent its spread. They decide they must close the gates of the town and impose quarantine.

Despite the quarantine, some citizens dress up to go to elegant restaurants to dine and drink the night away—being ready to flee when another diner shows signs of sickness. (That might remind you of our fellow citizens, who wouldn’t stay away from bars until they were closed, and then flocked to lakefront trails and parks, until they too were officially closed.)

The plague arrived in Oran abruptly in April of 194X, came to a peak quickly (at its height, 500 people a week died), then slowly dragged on for months until finally ending the following February, “slinking back to the obscure lair from which it had stealthily emerged.” Then “at last, at daybreak on a fine February morning, the ceremonial opening of the gates took place.”

Like the DeFoe book, Camus’ Plague is told by a “narrator,” who occasionally identifies himself as such. However, there are many sympathetically drawn characters with whom Dr. Rieux interacts as he goes about his days. Dr. Castel, who works to make a serum to cure the plague; Grand, a clerk for the city government; Cottard, who tries to commit suicide; Jean Tarrou, a newcomer to Oran; and Dr. Rieux’s mother, who comes to stay with him after his wife leaves for the sanitorium.

Given his political activism and the time in which Camus wrote The Plague, one can be sure that the contagion he wrote about has philosophical or ideological implications. The fictional plague arrived in the town of Oran, Algeria, in early spring and finally departed less than a year later. Of course, it took much longer for the 1940s breed of fascism to spread across Europe, from Germany to Spain and Italy, and finally to slink away. And it always lurks on the outskirts of societies, threatening to rise again.

Camus, a French Algerian, was a member of the French Resistance. He received the Nobel Prize for Literature in 1957 and died three years later in a car accident.

The Plague is available from many booksellers as a print or ebook.

Three novels about plagues. Clearly, Rebecca Makkai’s book is the most engrossing and readable. It’s a great piece of storytelling and character development. Albert Camus writes a more somber novel but it is compelling as he draws us along through the course of the plague. I recommend DeFoe’s book as well, for its 17th century view of the crisis we live with today. Also it’s short (my Kindle version is 183 pages) but has no chapter or section breaks, which I find annoying.