Who said theater was dead in the summer? Chicago’s theaters, storefront, midsize and large, have active summer seasons. These are some of the plays I’ve seen and reviewed in the last few weeks. They’re all still running, so you have time to see something wonderful.

Taylor Mac’s script for Hir (pronounced “here”) is brilliant, wordy and fast-moving. It’s a startling play, as I said in my headline, because the publicity makes you think it’s all about sexuality and gender identity. But it’s about much more than that. Terrific acting and a set that will make you happy to go home to your relatively neat living room. Director Hallie Gordon has some of Chicago’s finest actors to work with and she takes full advantage of their talent in the pacing and mood of this play. Runs through 8/20; running time 2 hours.

Megastasis by Eclipse Theatre at the Athenaeum

Megastasis‘ title is odd and never really explained well in the script, but ignore that, because this play is terrific, terrifying and informative. Yes, really informative. The playwright takes the time to have characters explain what’s happening to young black men because of mandatory minimum sentencing, changes in drug laws, asset forfeiture, and parole restrictions. The story is about Tray, a young man trying hard to make a life for himself and his baby daughter, while living with his grandfather. A couple of small mistakes (like buying a few joints) get him in trouble that results in a long prison term. It’s a wonderful and disturbing human story. My review. Runs through 8/20; running time 2 hours, one intermission.

Lela is a woman disrupted and betrayed by the men in her life. It’s an unsettling and searing performance by Cruz Gonzalez-Cadel, in a play that the playwright calls a monologue. But the men keep appearing to interrupt her and change the course of her difficult life in an eastern European war zone. Read my review and see this show before it closes on 8/19; running time is 100 minutes, no intermission.

At the Table by Broken Nose Theatre. Photo by Matthew Freer

At the Table by Broken Nose Theatre at the Den Theatre

My review of At the Table mentions that it might remind you superficially of The Big Chill, but the conversation goes much deeper than that 1983 film. Act one is chatty, sometimes contentious, as we get acquainted with the diverse group of friends. Then, “scene two of act one breaks the play open. Perlman’s smart writing has lulled us into thinking we are seeing a contemporary comedy of manners, set in a rustic weekend house … while lurking in the bushes are today’s racial and identity collisions.” You can see At the Table–and you should see it–through 8/26. Running time is 2.5 hours with one intermission.

This is a terrific one-man show where Erik Jensen takes on the persona of iconic rock music critic Lester Bangs and invites us into his messy, drug- and cough-syrup ridden musical nightmare life. I reviewed this with one of my colleagues and we had fun with it. Jensen and his wife, Jessica Blank, are co-playwrights in this adaptation; she’s the director. They are a formidable pair. Runs only through Saturday 7/29; running time 90 minutes.

The Nance at Pride Films and Plays

There’s a lot of silly burlesque comedy plus bubbly dancing girls in The Nance, but there’s substance too, as my review notes. The story is about a middle-aged gay man who performs “the nance act” at a 1930s New York burlesque theater at a time when the same activity in real life would put him in jail for illegal homosexual activity. It’s a time of change in burlesque theater and the playwright doesn’t hesitate to tell us about the actions of Mayor Fiorello La Guardia and his licensing commissioner–and the response of the theater community.  Runs through August 13; running time 2.5 hours.

I’ve seen five plays in the last two weeks. Most of them are provocative and well-produced gems from small theater companies, generically called storefronts, although they may well be in warehouses, church basements, behind restaurants or in old neighborhood centers. They’re by far the best theater bargains in Chicago and often demonstrate quality superior to the more high-profile theaters. Here are my theater picks for today.

Yes, I’m always raving about this company, which produces plays mostly by eastern European dramatists. I like the bitter edge of these plays, their black humor and their historical references and precedents. Their current show, Vatzlav by Slawomire Mrozek, pokes fun both at capitalism and authoritarian governments. Vatzlav, a former slave, is saved from an ocean disaster when he lands on a magical island where inexplicable things happen. The inhabitants include a blind old man named Oedipus, a youth who turns into a bear, a roving ukulele player, and the rich couple who own the island. Don’t try to make sense out of it; just enjoy it. The set is simple and the costumes as usual are brilliant and colorful.

Playwright Mrozek died last August in France. He was often referred to as the Polish Ionesco and his work is compared to that of Czech playwright Vaclav Havel. Vatzlav runs thru May 24 at the Trap Door Theatre, 1655 W Cortland.

Director Beata Pilch, whose bio says she was born in the Polish district of Chicago, is founder and artistic director of Trap Door. The company has been invited to Poland to work with Teatr Witkacy and they’re raising funds for the trip. You can donate here.

Henrik Ibsen’s The Doll’s House, published in 1879 and premiered in English in 1889, is now considered a groundbreaking piece of modern drama. It explores gender politics, scandals and marital relationships, and it brought realism to theater, when most were staging traditional costume drama. Calamity West’s new play is inspired by Ibsen’s but it’s not an adaptation. Nora in the original is the first dissatisfied housewife—84 years before Bette Friedan’s book explained the problem to us.

In the new version, Nora is a stay-at-home housewife, dominated by her successful husband Torvald, who doles out her allowance sparingly and monitors her activities. Her main job is recreational shopping. So far, like Ibsen. The new play is set in Manhattan in 1989 on the day the Berlin Wall fell. An old friend of Nora’s arrives to visit and the play veers away from the Ibsen version. The memories and tensions between Nora and Christine are the highlight of the play, while Torvald and the neighbor doctor circle around them and spar over Nora’s affections. The performers are excellent and director Jim Yost keeps the 90-minute play snapping along. The script still needs some work; there are parts that are slow and some of the dialogue seems dated.

The idea of Nora as a rich stay-at-home wife was dated in 1989, unless you moved in the circles of high-powered lawyers, financiers and consultants. In those worlds (where I worked as a marketing minion in those years), the rich stay-at-home dabbler wife was the standard. I met dozens of them at partner meetings. I couldn’t figure out how they spent their time. Recreational shopping, most likely.

The Doll’s House Project runs thru June 8 at the Athenaeum Theatre.

Cock is a play title you very rarely find in a review headline. I’m hoping that’s because of fear over internet anti-obscenity filters, rather than puritanism on the part of copy editors. The play by Mike Bartlett is a love triangle and a power play among three characters: John, a bisexual who is fighting to discover his identity; M and W, his lovers, who battle each other and John himself to determine the course of their lives.

The setting is London in the present but the set mimics a small arena where cock-fighting might take place. The floor is covered with fake gravel; the arena is surrounded by a low iron wall.  The characters frequently take positions at opposite sides, as if about to face off. In the first half, new scenes are signaled with a bell like the start of a new boxing round; after blackouts, the characters open new scenes in attack pose. The set design and the production vigorously directed by Darrell Cox make clear that the title refers to several meanings of the word, including adult male chickens and gunlocks, in addition to the male anatomy.

The actors create an intense atmosphere, which is enhanced by the intimate space. (The audience sits in tiered wooden stalls with cushions provided at the door.) The semi-comfortable seats and the tension among characters mean that 80 minutes is about the most one can tolerate of this drama that forces John to, finally, make a choice.

The Way West at Steppenwolf Theatre 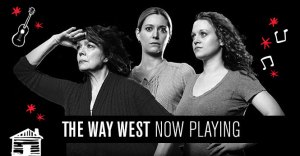 Mona Mansour’s play seems to celebrate America’s pioneer spirit and our western expansion, but ends up in personal bankruptcies in 21st century Los Angeles. The family members—a mother and two daughters—have each in her own way found a way to financial ruin. Mom just quit paying her bills, is ignoring her illness, and believes everything will be ok. The older daughter has taken time off from her job in Chicago to help her mom sort thru her records and file bankruptcy. Her younger sister cares for her mother and has gone from job to job; she is in much the same financial shape as her mother. The older sister at first seems like the responsible one, but after she loses her job (learning about it by voice mail), everything falls apart for her too.

The story line is right out of 2008 and could be stronger with a more tightly edited script. The unfortunate musical interludes with western songs by the mother, accompanied by her daughters on guitars, are strange breaks in the action that just don’t work. (The wagon train and  campfire projections behind the performers only increase the silliness.)

The Way West runs two hours plus intermission and can be seen thru June 8 in Steppenwolf’s downstairs theater. It’s one of the few times in my 20+ years as a Steppenwolf subscriber that I’ve been disappointed by a production.

More theater news: Expansion project for The Den Theatre and The Hypocrites

The Hypocrites, one of my favorite small theaters, will be leaving their claustrophobic basement space at Chopin Theatre and moving into a new space nearby on Milwaukee avenue that’s being taken over by The Den Theatre. The Den, another of my faves, currently has several performance spaces at 1333 N Milwaukee over a large empty retail space. They’re taking over that space and it will be the new home of The Hypocrites. It’s a great story for Chicago theater and for the Wicker Park neighborhood. You can read more about it in my article at Gapers Block.