Theater season never really ends in Chicago but there’s always a flurry of openings in September. Here are a few plays I’ve seen recently and recommend for your consideration.

Ronald Keaton, a journeyman Chicago actor, turns himself into the great British leader for this one-man show that’s continuing at the Greenhouse Theater Center. The run is so successful that it’s moving into the large downstairs mainstage space.

Keaton has been a successful Chicago actor for years, performing comedy, drama and musicals, at suburban and city theaters, large and small. But he rarely has performed the leading or “hero” role, until now. He has created his own role, his own show and his own production company, as Chris Jones describes in this article about Keaton.

The show is excellent and Keaton takes us through Churchill’s life from childhood through his period as prime minister during World War II. The 135-minute show, performed with one intermission, runs through Sept. 21 and then Oct 3 to Nov. 9. Here’s a video clip of Keaton as Churchill.

Shattered Globe, which has a long and solid history among Chicago storefront and midsize theaters, is now staging a stirring tale of shipwreck and survival, based on an actual event that inspired Herman Melville’s Moby Dick. Here’s how my Gapers Block review starts.

“Tales of the whale–the commercial treasure and leviathan of the sea–and the sailors who set out in wooden ships to hunt them, are endlessly fascinating. Herman Melville’s Moby Dick stands as one of the great adventure tales of world literature.

“A story that inspired Melville is being staged now by Shattered Globe Theatre in the exciting adventure/survival play, The Whaleship Essex by ensemble member Joe Forbrich. The two-hour-plus drama is staged with meticulous attention to nautical detail through the use of lighting, projections and simple wooden benches that serve as the whaleboats in which the whalemen leave the ship to capture whales. Or survive a shipwreck, as the case may be.”

There’s some excellent acting by this large cast, directed by Lou Contey. The acting and creative staging persuade us that the crew is indeed fighting to survive an attack by an enraged whale. Fortunately, a few seamen survived to write accounts of the Essex disaster. The Whaleship Essex continues at Theater Wit on Belmont through October 11.

The Arsonists at Strawdog Theatre 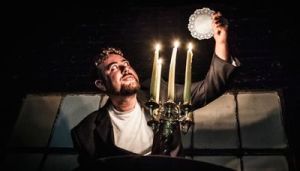 Max Frisch’s 1953 radio play, The Fire Raisers, was adapted for the stage in 1958 and was understood as a metaphor for the rise of the Nazi Party and citizens’ inability to recognize evil. This 2007 adaptation by Alistair Beaton keeps the chilling symbolism of the arsonists who intend to start fires, political or residential.

Director Matt Hawkins does a fine job with Strawdog’s small cast, performing on a two-level stage in their second-storey venue. The chorus of firefighters serves to warn us of coming events as well as fight them when they occur. Time and place are ambiguous in The Arsonists, but it should set off warning bells for all sorts of evil occurrences or political skullduggery in the 21st century.

The Arsonists, 90 minutes with no intermission, runs through Sept. 27 at Strawdog on Broadway near Grace. And here’s a dining tip. Tutto Fresco Trattoria at 3829 N Broadway is a neighborhood jewel and just steps away from the theater.

I’ve seen and reviewed a couple of plays and other events since last week and I have a few opinions I want to get off my mind. You won’t be hearing from me for a couple of weeks because I’m going to a very exciting writers’ program. I’ll tell you all about it when I get back.

Death and the Maiden at Victory Gardens 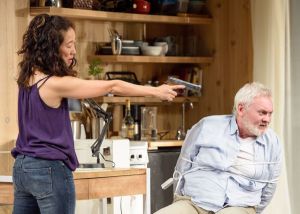 A gripping political play by Ariel Dorfman, set in a country “that is probably Chile,” in the time after the regime of dictator Augusto Pinochet.  See my brief review on Gapers Block, which links to my original detailed version on theandygram.com.

The Late Henry Moss at The Artistic Home

I tweeted a link to my review on Gapers Block, with this comment: “You think your family is obnoxious? See what a Sam Shepard family is like.” A very good production of a play that is not for the faint of heart. The Artistic Home cast is talented and the acting solid. Their productions are reliably so.

This play, now closed, got excellent reviews. The two lead performers give fine performances and are also solid at their respective talents: music and basketball. The father, a violinist, doesn’t understand his daughter’s obsession with basketball. The daughter, a basketball player, doesn’t understand why her father thinks music is the only thing that matters in life. The conversation and interplay is entertaining, but the plot doesn’t hang together. At the end of the 80-minute play, I thought, well, ok, did I just waste an evening or what?

If I had been reviewing this play, I would have given it two stars or “somewhat recommended,” as several reviewers did. And others gave it three or four stars.

And one more thing…. 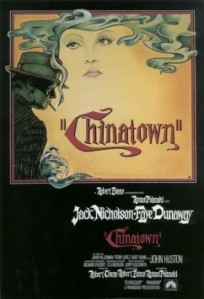 Chinatown. A movie review, for your home viewing. Have you seen Roman Polanski’s Chinatown in the 40 years since you first saw it in a movie theater? This 1974 film is absolutely brilliant. Every single detail–of clothing, behavior, autos, and clues to the mystery–is perfect and perfectly positioned. And of course, superb performances by Jack Nicholson, Faye Dunaway and John Huston make it as astonishing film.

I liked it when I first saw it, but in recent years, I’ve learned a lot about filmmaking and directing (thank you, Roger Ebert!) and I was able to get even more out of it. Chinatown is available streaming on Netflix or, of course, on DVD. Next time you’re looking for a great movie to watch, choose this one!