Fall farrago: Cultural treats for you via stage, screen and museum

This will be a quick post before I leave for nine days of travel. When I return, I’ll have plenty of notes for my next essay. For now, here are a few things you won’t want to miss.

This is a production of Steppenwolf for Young Adults, which basically means high-school-age youngsters. This is a heady play, very thought-provoking and extremely well done. As my review headline says, Steppenwolf recreates the dystopian past and strongly suggests dystopia still threatens us. My grandson James and I reviewed it and we both loved it. He has read the book and so was eager to see how it played out on stage. Here’s our review. The play is targeted at school groups so the weekend performance schedule is brief. I strongly encourage you to see it before it closes November 20.

You can see some of the great films by this German master at the Siskel Film Center. The retrospective opened earlier this month but there are still some great films in store in the next few weeks, such as Wings of Desire (one of my favorite films of all time), Paris, Texas, and Until the End of the World. Here’s my preview of the retrospective.

The Siskel gallery is also showing a nice exhibit of film posters titled Wenders and the New German Cinema.

The Newberry has created a marvelous exhibit from its plentiful archives of Chicago theater history. The exhibit tells the story of Chicago theater from before the 1871 fire and brings it to the opening of the Goodman Theatre in the 1920s. I described the exhibit here. Fascinating and scholarly, not flashy and animated, the exhibit runs through December 31. Don’t miss the Newberry bookstore while you’re there; it’s one of our better bookstores, and deserves our appreciation in this era of the demise of real bookstores.

Big art questions: What is art and who gets to make it? 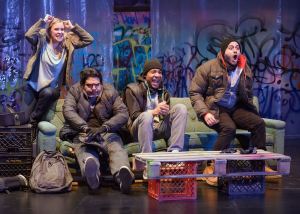 My review of This Is Modern Art, the new Steppenwolf for Young Adults play, went live on Gapers Block Monday night, soon after the scathing reviews by the two daily newspaper critics had been posted or published. I was surprised at the level of criticism in the two reviews—not criticism of the play itself, but of the theater for producing it at all.

This Is Modern Art (based on true events) is the story of the crew of young graffiti writers who decide they need to define “modern art” on their own terms and so they paint a “piece” (short for masterpiece) on the east wall of the new Modern Wing of the Art Institute. The event actually took place five years ago. In the play, the artists are shown at a party where an art student brags about attending the opening of the Modern Wing and seeing all the masterpieces plus “everybody in the art world.” Clearly Seven (the leader of the crew) knows his art history, but he says “We only paint everywhere else, because they won’t let us paint inside.”

The play acknowledges the illegality of graffiti writing—and also distinguishes between gang graffiti (usually tags) and the street art created by the graffiti writers. Among the criticisms of the play is that it sends the wrong messages to young people. This is a really offensive argument for young people, who do not see themselves as naïve and malleable to suggestion. As my grandson said, “Yeah, I liked the play a lot but that doesn’t mean I’m going to go out and buy spray paint and write on walls.” 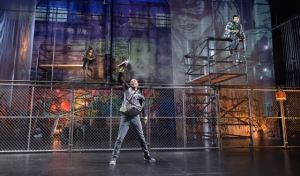 In my review, I commented, “Was what happened an act of vandalism or important artistic commentary? The question deserves to be addressed. The script and the characters acknowledge that they are committing an illegal act. But the important message the play articulates is that art shouldn’t be confined to elite galleries and museums with $18 admission tickets. The graffiti writers are artists shouting to be seen and heard. They demand visibility in a society that decrees them invisible–as artists and as individuals.

Twitter commenters noted, “If you see a Shakespeare or McDonagh drama, do you criticize the artists for glorifying/condoning murder?” And “Does anyone try to ban the Netflix series ‘House of Cards’ because Francis Underwood commits murder to get ahead?” The reviews by the Tribune and Sun-Times critics received their share of Twitter snark. Trust me. It wasn’t pretty.

I have written frequently about street art and post-street art (see Related Posts below) and I find the genre fascinating and vibrant. I wouldn’t want to shut it down. But I agree that I wouldn’t want to wake up one morning and find my house (if I had a house) covered with graffiti. The play also differentiates between “permission walls,” where an owner or a community invites artists to write on or paint walls. This would cover some of the paintings in highway and railroad underpasses that have been sponsored by local communities. Some graffers are happy to be able to show their art on permission walls, while to others, the risk is the drug that fuels their creativity. In any case, I believe they ought to be able to paint public walls and abandoned spaces.

And the Art Institute should have left the “modern art” masterpiece on its east wall for a few days instead of immediately calling in the graffiti blasting crew. And most importantly, Steppenwolf should have commissioned a “piece” for the south wall of their building, to be displayed at least during the run of this thought-provoking play. That would have been a meaningful way for the theater to make a statement supporting their production.

See my review of This Is Modern Art and go to Twitter and search #thisismodernart or @kevincoval to see the commentary about the play.

Let me know what you think about this issue. Who gets to make art and where should it be shown? Please comment below.

Art in the gallery and out in the street.

Out in the street: street art and post-street art