Chicago had two days of almost-spring with temps above 40 last week but now winter is back in force. I just spent a few days in North Carolina, where their eight inches of snow melted very quickly. While I was there, we had three 60-degree/no-jacket days. Meanwhile, there have been lots of theater openings recently. Here are a few plays I’ve seen that you might enjoy too

In the Matter of J Robert Oppenheimer at Saint Sebastian Players 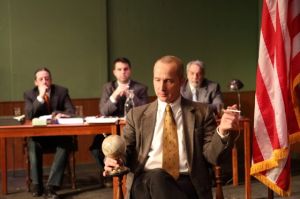 Yes, it’s talky and intellectual and it makes you think. Thinking might warm up your head. This three-hour play by the German writer Heinar Kipphardt leads us thru the Atomic Energy Commission hearing that resulted in Oppenheimer, the “father of the atomic bomb,” being stripped of his security clearance. This production by the Saint Sebastian Players is very good, despite some actorly flaws. The main characters are portrayed very well and the pace is engrossing. The play runs until March 9. See my Gapers Block review here, along with ticket and location details.

In the mood for some stride piano playing, lively singing and dancing by five charismatic performers to the music of Thomas “Fats” Waller? Ain’t Misbehavin’, a musical revue by Porchlight Music Theatre, is terrific and I don’t even like musicals. It’s sure to win plenty of Jeff awards.

My Gapers Block review noted that this is Porchlight’s contribution to Black History Month:  a musical revue and tribute to the music of Thomas “Fats” Waller and the Harlem Renaissance. “Fats himself would be proud of this production, performed at Stage 773 with an excellent live band led by über-pianist Austin Cook.” See my review for all the logistics and production details.

Crime and Punishment at Mary-Arrchie Theatre

If you never managed to finish the Dostoyevsky book in high school or college, here’s your chance to gain a new appreciation for the character Raskolnikov and the theme of crime and guilt. Here’s how my Gapers Block review started: “Mary-Arrchie Theatre takes on a difficult task in staging this 2003 adaptation of the Fyodor Dostoyevsky novel, Crime and Punishment. But with intelligent direction by Richard Cotovsky, this talented and respected off-Loop theater gives the audience a gripping 90 minutes. We meet Raskolnikov (a strong performance by Ed Porter), the poor, sickly, arrogant former law student who commits the crime, suffers guilt and psychological trauma and, finally, punishment.”

The script is the same one presented in 2003 by Writers Theatre in Glencoe on their tiny back-of-the-bookstore stage, with Scott Parkinson doing a superb job playing Raskolnikov. The novel was adapted into a play by two Chicago playwrights–Marilyn Campbell and Curt Columbus. The Mary-Arrchie play runs until March 16.

Judith: A Parting of the Body at Trap Door Theatre

Trap Door’s excellent production of Judith: A Parting of the Body by Howard Barker is a revisionist take on the biblical story of the Israelite widow who goes to the enemy camp to seduce General Holofernes. The language is poetic and sometimes vulgar. The three actors each play out their stories in an engrossing way.

You’ll remember the image, even if the story is not familiar. There are many famous versions of the painting often titled “Judith with the Head of Holofernes”; the one by Artemisia Gentileschi may be best known. But I have always liked the Caravaggio version best. You can see it on this Wikipedia page.

Judith has been extended so you can see it at Trap Door, the little theater space at the end of a gangway at 1650 W Cortland, until March 8.

Tribes by Nina Raine recently ended its run at Steppenwolf. We saw it near the end of the run since we had to change our tickets from one of the deep-freeze days. The reviews of this play were mixed, varying from “somewhat ” to “highly recommended.” The story is about a family with one deaf son, who leaves the family cocoon and discovers the outside world and the deaf community. The theme isn’t new—the controversy over the benefits of sign language vs. lip-reading for the deaf–and it still demands our attention. I really wanted to like the play, but I found most of the characters unlikable and the play failed to keep me from checking my watch to see when I could leave.

A film recommendation. In case you, like me, were disappointed in the reviews for The Monuments Men and decided not to see it, I’d like to recommend a good documentary that tells the story and even includes some of the real Monuments Men. The Rape of Europa, 2006, was written and directed by Richard Berge, Bonni Cohen and Nicole Newnham, with narration by Joan Allen. 117 minutes. Streaming on Netflix.

The film is drawn from the book of the same title by Lynn H Nicholas, who appears in the film; her book won the National Book Critics Circle Award in 1994. One of the co-producers is Robert M Edsel, the author of the book The Monuments Men, from which the current film is adapted.

An example of transitivity. Did you know that the song, “The St Louis Blues” got its name from a street, not from the Missouri city? Ann K Powers, the NPR music critic, posted a photo on her Facebook page of a memorial plaque in Bessemer, Alabama. The W C Handy song, “Pipeshop Blues” was also known as the “St Louis Blues” for St Louis Avenue, the street that ran through the Howard-Harrison Steel Company of Bessemer.

When I shared the image on my Facebook timeline, my economist son observed that this is an example of the mathematical concept of transitivity, which is

Follow my blog, please.  If you’d like to receive an email when I post a new article on nancybishopsjournal.com, just put in your email address on the upper right side of this page.  I promise no spam and you don’t need a password!