You may never have heard of John Hammond. But if you’re a music fan or a civil rights supporter, you know he’s a major figure of the 20th century. Radiolab, the WNYC program, did a show this week titled “The Power of Music” and almost half of it was devoted to the work of Hammond, the civil rights activist and A&R executive (artists and repertoire or talent scout) for Columbia Records. During the course of his long career, Hammond, who came from a wealthy family (he had a Vanderbilt in his past), discovered and launched the careers of musicians like Count Basie, Benny Goodman, Aretha Franklin, Bob Dylan and Bruce Springsteen. And dozens more.

Hammond was instrumental in bringing the music of African-American performers out of the “race music” ghetto they languished in for decades. Early in his career, he organized the first Carnegie Hall concert to feature black musicians—in December 1938. One of the musicians he wanted to feature was Robert Johnson, the legendary backwoods Mississippi blues master. When he learned that Johnson had died recently, he played some of his music by hooking up a turntable to the Carnegie Hall sound system. The Radiolab segment titled “Letting the Devil Tune Your Guitar” explores the legend about Hammond and Robert Johnson and the story that Johnson sold his soul to the devil to become a great guitarist. Radiolab comes to the spooky conclusion that there might have been more than one Robert Johnson. It’s a compelling piece of radio.

Robert Johnson died at 27 in about 1938 (or 1939 or 1941). His music inspired musicians like Eric Clapton, Keith Richards, Robert Plant, Jimi Hendrix and Bob Dylan. Johnson was inducted into the Rock and Roll Hall of Fame as an influencer at its first induction in 1986. He’s often credited as the songwriter of “Sweet Home Chicago.” 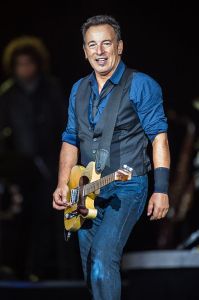 This weekend I watched an old documentary about that New Jersey musician who Hammond signed to Columbia in 1972. Blood Brothers: Bruce Springsteen and the E Street Band was made in 1995 when the band got together in a studio in New York to record a Greatest Hits album. Seeing the band 20 years younger was a visual shock. Their current personas are indelibly imprinted on my brain because I saw them so many times during recent tours. Today, yes, they’re older, grayer, balder, but they seem to be more fit and energized. Many of the band members in ’95 look a little pudgy and scruffy. Even Bruce, who today looks trim, even skinny, in tight black jeans, was a bit fleshy. And the beards make a huge difference. At first I didn’t recognize some of the band members under their hirsuteness. Garry Tallent, the bass player, and Roy Bittan, the pianist, looked very different. And so did Bruce.

The reunion was the first time the band had played together in 11 years and you could see how happy and excited they were to be together again. The power of music took them to great heights in recording the 18 songs for the album. The film shows the effort and creativity involved in getting the album made. Producer Chuck Plotkin and manager Jon Landau work closely together. Bruce is rewriting lyrics on a yellow pad and taking votes for the photo on the CD cover. Nils Lofgren and Max Weinberg are writing lyrics or notations or arrangements, as they’re getting ready to record.

The songs “Blood Brothers,” “Secret Garden,” “Murder Incorporated” and “This Hard Land” are some of the new tracks on that album. The film shows each of them being worked out with instrumentation changing until Bruce, the perfectionist, is satisfied. The final section shows the music video of “Murder” (directed by Jonathan Demme) being filmed in front of an audience of fans at Tramps in New York.

If you’re interested in learning more about John Hammond, there are several biographies. This book by Dunstan Prial looks like a good choice and I’m going to read it soon. For more info on Robert Johnson, I recommend Elijah Wald’s Escaping the Delta: Robert Johnson and the Invention of the Blues.