I’ve been seeing a lot of theater lately and I wanted to post my last three reviews for Gapers Block.  Two of these shows close in the next week, so hurry up and see them. We have an unbelievable wealth of theater talent in Chicago. These plays are worth your time – and these small theaters will appreciate your support.

My next post will get out of Chicago and report on my visit to New York, featuring one off- and one on-Broadway show.

Mahal by Danny Bernardo is a story about a Chicago Filipino family, the first play with that ethnic focus, to my knowledge. Bailiwick Chicago is presenting it at Stage 773 at 1225 W Belmont, formerly the Theater Building. The Stage 773 owners have upgraded the space, especially the entrance and lobby area, to be very attractive and contemporary—a great improvement. 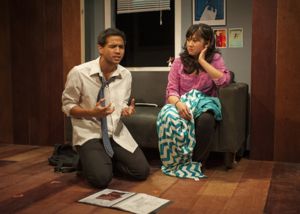 “Mahal is a family story. A Filipino family with strong roots in the Philippines adjusts to life, love and loss in its new country. The family members – father, two sons and a daughter – are each recovering in their own way from the recent death of their mother. (Some family members call the mother’s phone number to hear her voicemail greeting – and leave messages for her until the mailbox fills up.)”

The Casuals at Jackalope Theatre: Exploring Life in the Atomic Era

The Casuals is set in 1955 Nevada and involves personal as well as political issues. It’s a new play by Jackalope Theatre Company with script by Chance Bone and Andrew Burden Swanson, and direction by Jonathan Berry. Here’s how my review starts: 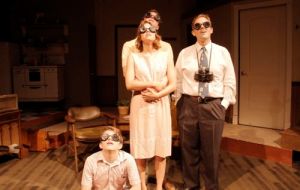 “Some things about The Casuals might make you uncomfortable–nuclear testing, for instance. Government agencies that hide the truth (and insist you don’t ask questions). Stories that may be lies or truth. A mother who tells her son how his father died a hero. An uncle who tells his nephew’s wife how his brother really died.”

I hardly ever get to indulge my love for rock and roll at the theater. So I was very excited to get to review this show, which includes a scene set at CBGB, the famous New York rock club. Rooms features a talented live band and some straight-up rock as well as a little punk.  My review starts this way:

“The sign outside the theater says, “This is a rock musical. It will be loud.” And it starts loud with a four-piece rock band playing preshow music including the classic ‘Seven Nights to Rock.’

“Rooms: A Rock Romance is a fairly traditional musical, punctuated by some great rock and punk rock songs performed on stage with a band. It is, at its heart, a love story about two people with different visions of life. Monica (Hillary Marren) wants to be a rock star, to travel and perform all over the world and Ian (Matt Deitchman) is a musician who prefers to stay at home in his own room with his guitar.”

Broken Nose Theatre, by the way, takes its name from the way Nelson Algren describes my favorite city in his book, Chicago: City on the Make.

“Yet once you’ve come to be part of this particular patch, you’ll never love another. Like loving a woman with a broken nose, you may well find lovelier lovelies. But never a lovely so real.”