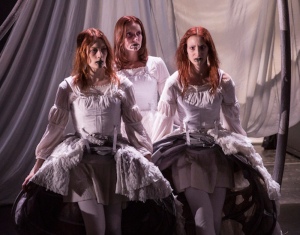 Here are recaps of three plays I’ve seen in the last 10 days. They’re all recommended and all still running so you have time to see them. I’ve been focused on the David Bowie Is exhibit this week and I’ll post my review of that soon. 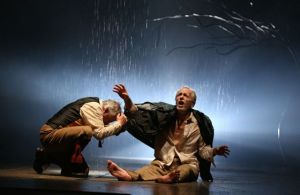 A four-star production of this Shakespearean masterpiece. The most four-star part of it is the performance by Larry Yando as King Lear. He’s one of Chicago’s finest actors and this is a performance that has “Jeff award” all over it. Here’s how my Gapers Block review begins.

“King Lear, perhaps William Shakespeare’s most-revered play, is an existential tragedy. It’s a story of power and family lost, mind and health destroyed. But it’s also a retirement story and a family tragedy. It’s amazing how deeply and warmly current issues are treated in this 400-year-old masterpiece.

“Fathers mourn relationships with their children. Siblings fight over the estate before the parent dies. Old men suffer the tears and trauma of aging. And most profoundly, we see the onset of dementia in someone who has been a brilliant and powerful leader.” 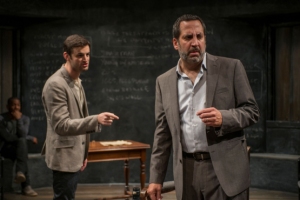 Isaac’s Eye by Lucas Hnath is a smart, funny exercise in what-if. What if a young Isaac Newton and the older and less well-known scientist, the brilliant Robert Hooke, met and discovered they had similar and conflicting interests in color and light? The result is a mesmerizing two-hour play at Writers Theatre’s back-of-the-bookstore location in Glencoe. In this tiny space, you are literally right at the feet of the two great men as they bicker and compete, in modern dress and language. It’s a fascinating post-modern drama.

One of my favorite Chicago actors and old friends, Marc Grapey, plays Hooke with the right amount of antipathy and snark. And Jürgen Hooper plays Newton, with geeky naivete matched by seething ambition. Elizabeth Ledo gives a smart performance as Newton’s girlfriend. The compelling addition to the play is LaShawn Banks as a narrator and dying man, who agrees to undergo Newton’s eye test. He is a constant and energizing presence on the tiny set, keeping the mood dynamic even when he is sort of “offstage.”

Isaac’s Eye runs until December 7 at Writers Theatre. I didn’t review it formally but I’m glad I didn’t miss it. You shouldn’t either.

Season on the Line at the House Theatre 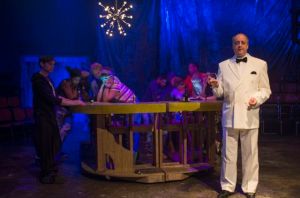 The man in the white suit is the critic. Photo by Michael Brosilow.

I have to confess. I loved this play. This is the headline for my review: “House Theatre Plants a Big Wet Kiss on the Theater Industry.” It is loaded with theater jargon and literary references and the opening night audience of reviewers, Jeff Committee members, friends and relatives clearly loved it as much as I did.

Season on the Line, smartly written by House ensemble member Shawn Pfautsch,  is the story of a struggling mid-size theater company that decides to produce a new and inventive production of Melville’s Moby Dick as the culmination of an important season. We are treated to production meetings, rehearsals, after-parties and backstage gossip as the company gets ready to present its first show, The Great Gatsby (a success), and second show, Balm in Gilead (not a success). All the while, the artistic director, played with great intensity and possibly obsession by Thomas J Cox, is focused only on the great white whale. Yes, he’s Captain Ahab. He believes if he can produce a show that wins a four-star review from the influential theater critic, he will save the theater company.

The House Theatre, always an inventive and creative bunch, obviously has great fun with this. They advertise it as an “epic love letter to the American theater.” And it is. If you love theater, you’ll love it. It’s not for amateur theater-goers, however.

Season on the Line, which runs until October 26, is a 3-hour whale, plus two intermissions. That’s right, you’ll be in the theater for 3.5 hours. I loved every minute of it and if you read this far, you will too.

You can type in your email in the upper right corner of the page to follow me. That means you’ll get an email when I post a new article or review. No password needed, no spam.