If you weren’t at the Mayne Stage in Rogers Park last night for an evening with Women of Letters, you missed a profound and theatrically moving event—for writers, performers and for women. Seven Chicago female artists sat at a table and in turn came to the mic to read the letters they had written addressed “to the moment the lights came on.” 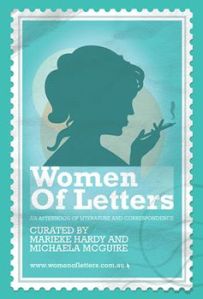 Women of Letters started as an Australian literary salon focused on celebrating the lost art of letter-writing. This is their second US tour and first appearance in Chicago. The large and enthusiastic audience at the Mayne Stage should ensure a return visit in 2014.

One of the guidelines for Women of Letters is that events are not recorded, so that participants can feel free to write about very personal subjects. Therefore, even though I took notes, I won’t use any quotations. But I will tell you a little about the letter-writers and the event.

The moderator was Marieke Hardy, an Australian writer and co-curator of Women of Letters. She introduced each writer and later conducted a Q&A with the panel on letter-writing.

The letters verged on storytelling; they often had a confessional nature. They were in turn funny, poignant, sad—and always moving. One of the performers wrote about her disastrously disorganized life, while another wrote about disappearing into the dark as a high school drama prop master, and another speculated that people treat each other horribly because they fear scarcity. The readings lasted from a few minutes to more than 10 minutes each.

Tavi Gevinson, a teenaged celebrity who will celebrate her 18th birthday next month, has achieved renown for her blog, which focuses on issues affecting teenage girls and is written mainly by teenage girls. She has appeared on TV, acted in short films and had a role in the 2013 Nicole Holofcener film, Enough Said, starring Julia Louis-Dreyfus and the late James Gandolfini.

After the readings, Hardy asked each performer to talk about how letters may have been important in her life. They also discussed how the WOL letter-writing process had worked for them. Audience members had a chance to ask questions of the performers.

Each audience member received a stamped WOL postcard and a stamped “aerogramme” to encourage us to do our part in restoring the art of letter-writing.

Women of Letters started with events in Melbourne, co-curated by writer/journalists Hardy and Michaela McGuire. Monthly events brought together five of Melbourne’s “best and brightest writers, musicians, politicians and comedians.” For each event, the participants were asked (in advance) to write a letter on a specific topic. The series has been so successful in Australia that three books of letters have been published as a result.

Women of Letters raises funds for the animal rescue shelter, Edgar’s Mission, a sanctuary for rescued farmed animals set on 60 peaceable acres in the foothills of the Great Dividing Range at Willowmavin, Kilmore, in the state of Victoria, Australia.

The 2014 US tour included performances in Los Angeles, San Francisco and Austin (during SXSW). Two performances are scheduled for next week in New York, one of which is titled People of Letters and features male and female letter-writers, including Michael Cunningham, Pulitzer-Prize winning author of The Hours. The New York topics are “a letter to the thing I wish I’d written” and “a letter to the night I’d rather forget.”

What would you write about?

The letter topics make me think about the letter I might write.
I’d love to know what you would write about ….

♥ The moment the lights came on

♥ The thing I wish I’d written

♥ The night I’d rather forget

Listening to the blues in Corky’s chamber

A hipster string quartet, a madman drummer* – and the inimitable Corky Siegel, collapsing on his back in an ecstasy of harmonica playing. That was the culmination of an evening with Corky Siegel’s Chamber Blues last weekend at the Mayne Stage.

Siegel is a well-known Chicago blues musician — harmonica and piano player – who has been playing in various Chicago venues since 1964.  You might have seen him years ago at Pepper’s Lounge on 43rd Street, where blues masters such as Muddy Waters, Howlin’ Wolf, Otis Rush, Junior Wells, Magic Sam and Buddy Guy played. Corky connected with guitarist Jim Schwall in the ‘60s and they played regular gigs there and toured and recorded as the Siegel-Schwall band into the 1970s; they still play today and have current dates on the concert schedule.

For the last 25 years, Siegel has been working on a hybrid kind of blues – combined with classical chamber music. Corky Siegel’s Chamber Blues plays several concerts in this area every year and travels the country and the world with this vibrant blues genre.

Last weekend I saw him at the Mayne Stage on Morse Avenue in Rogers Park. That’s a great venue with excellent acoustics and sight lines. If you pay a little more for “reserved” tickets, you’ll sit at a small café table on the main floor.

The concert opened with Siegel introducing the string quartet – two violins, viola and cello – to play two numbers, one of them from the Turtle Island Quartet. About that time, Frank Donaldson, the madman drummer, arrived to kneel at his tablas, bongos and other percussion instruments. Siegel came out soon after and the band began to rock in a series of jazzy blues numbers with some vocals by Siegel.  The setlist is mostly original compositions by Siegel, many with names like Opus 14, 16, 17.2, 8 and 4 (half of 8).

The band played for about 90 minutes, then came back for a short encore, during which Siegel played a rousing piano solo, eventually joined by all the other musicians chiming in at the keyboard.

The musicians are all excellent and charming performers, who seem to be having as much fun as the audience. Violinist Chihsuan Yang gets some amazing percussive sounds by fingerpicking her strings. Her fellow violinist Aurelien Fort-Pederzoli played a marvelous solo with Siegel. Violist Dave Moss and cellist Jocelyn Butler add great depth to the classical/blues sound.  And drummer Donaldson adds percussion in amazing ways, including a mystifying hand-slapping chorus. (Mystifying because I couldn’t figure out how he did it.) Plus he has a never-ending series of percussive instruments that add great fun to the music.  (I’m a sucker for drummers. If I ever run away from home, it will be with a drummer.)

What does chamber blues sound like?  You can hear some samples and learn about the Chamber Blues band here, including solo samples on the musicians’ bio pages.

The next local date right now for the Chamber Blues experience is Saturday, September 28, at the Beverly Arts Center.  I’ve alerted you. Don’t miss it.

*Springsteen fans will recognize that phrase from Bruce’s early era of cramming as many syllables as possible into a lyric line.

Madman drummers bummers and Indians in the summer with a teenage diplomat
In the dumps with the mumps as the adolescent pumps his way into his hat
With a boulder on my shoulder, feelin’ kinda older I tripped the merry-go-round
With this very unpleasing sneezing and wheezing the calliope crashed to the ground
Some all-hot half-shot was headin’ for a hot spot snappin’ his fingers clappin’ his hands
And some fleshpot mascot was tied into a lover’s knot with a whatnot in her hand
And now young Scott with a slingshot finally found a tender spot and throws his lover in the sand
And some bloodshot forget-me-not whispers, “Daddy’s within earshot, save the buckshot, turn up the band”

“Blinded by the Light” from Springsteen’s first album, Greetings from Asbury Park, NJ