The full cast of The Coast of Utopia, including playwright Tom Stoppard, center, in brown coat, and director Jack O’Brien, in glasses. Credit…Paul Kolnik.

This week I had a chance to revisit the most spectacular theater experience I’ve ever had. It took place on a weekend in February 2007. Over the course of two days, I saw all nine hours of The Coast of Utopia, Tom Stoppard’s trilogy on 19th century Russian intellectuals and revolutionaries. My New York friend Patricia and I hung around the new Time Warner Center at Columbus Circle and visited neighborhood cafes in between going to the Vivian Beaumont Theater at Lincoln Center for many glorious hours of theater. This week Lincoln Center Theaters celebrated that monumental theatrical achievement.

I flew to New York after work on Friday and met Patricia for an early lunch on Saturday, saw Voyage, part one, then had an early dinner and saw Shipwreck, part 2. On Sunday, we saw a matinee of Salvage, part 3. We had a final dinner, at which we both were almost too exhausted to talk. I had bought copies of the scripts and read Voyage on the way home on Monday morning. I saved the playbill on my bookshelf along with the three volumes of scripts.

The trilogy was also done as a marathon on a few Saturdays when you could see all three plays in one day, from 11am to 11pm.

I’ve never forgotten that weekend and like most memorable theater experiences, the visuals are imprinted in my brain, to be brought out when some tangential memory nudges them. That’s what happened this week.

Lincoln Center Theaters celebrated the 14th anniversary of The Coast of Utopia’s U.S. premiere in November 2006 with a virtual discussion that was open to theater fans. Director Jack O’Brien, four cast members—and—in person from London—the playwright himself. I was on a Zoom call with Tom Stoppard! No, he didn’t know I was there—only the participants were on the Zoom screen. But it was an exhilarating moment. 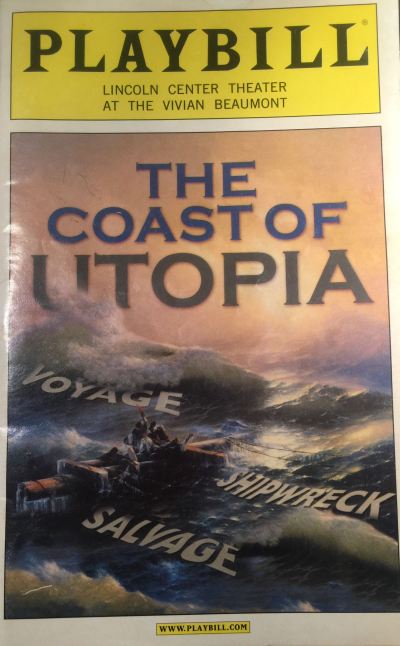 My copy of the Utopia playbill from 2007.

The play has more than 70 characters, performed by 40 actors in the New York production. The cast size and complexity of the story explain why this magnificent historical work has been produced only three times: in London in 2002, in New York in 2006-07, Moscow in 2007 and Tokyo in 2009. (This article describes the daunting nature of the production.)

Scenic design for the trilogy was by Bob Crowley and Scott Pask with costumes by Catherine Zuber. The gorgeous musical score, very much like a film score, was by Michael Bennett.

The actors participating in the discussion were Jennifer Ehle and Martha Plimpton, who played Liubov and Varenka Bakunin, two sisters, in Voyage; Ethan Hawke, as their brother Michael Bakunin, a writer and student of philosophy; and Billy Crudup, who played Vissarion Belinsky, a noted literary critic and radical.

The actors discussed the production experience, which involved a year’s commitment, starting with nine months of rehearsal. (The typical rehearsal time for a modern play is four to six weeks). Cast members prepared by studying Russian history and literature and four of the actors (including Plimpton) made a trip to Russia. “We did endless research…. We had books, piles of books, and notebooks where we noted reactions and questions,” one of the actors commented.

Before seeing The Coast of Utopia, I had been preparing too by reading Russian history and cultural history (Ivan Turgenev, Alexander Pushkin and Karl Marx are among the characters in Utopia). Many of the characters, including Belinsky and Alexander Herzen, are drawn from history. The play’s title comes from a chapter in Avrahm Yarmolinsky’s book, Road to Revolution: A Century of Russian Radicalism (1959), which is on my to-be-read list.

The cast compared the production—especially the occasional Saturday marathon performances—like going to camp. Meals were brought in and there were dressing rooms available for naps, Plimpton said. The intense rehearsal and performance schedule meant they spent almost all of their waking hours together at Lincoln Center Theaters for a year.

One experience they all vividly remembered was when actor Richard Easton, who played Alexander Bakunin, the father of the Bakunin siblings, “died on stage” for seven minutes. It wasn’t part of the script, but the audience didn’t realize that at first. During a preview performance, Easton spoke a final line (it was “That is my last word” after an argument with Michael) and started to exit, only to crumple in a heap at side stage. He had a heart attack. When Hawke realized that the fall was serious, he asked the audience the classic question, “Is there a doctor in the house?” But a stagehand performed CPR. Easton was revived in the ambulance and underwent a procedure to fix a heart arrhythmia. The opening date was briefly delayed because Easton’s character was a pivotal part of Voyage.

Hawke remembered that Easton asked him to come to his hospital room to run lines. After that, Hawke said, “we were all in service to something larger than ourselves.”

The play begins in a Chekhovian way; Voyage is set at Premukhino, the Bakunin country estate 150 miles northwest of Moscow. The sisters and brother Michael all long to escape to the city. At one point, in the middle of Voyage, Michael, who is in Berlin studying philosophy and translating a history, is asked to come back to the estate because Alexander wants him to study “agriculture,” for which he has no fondness.

The storyline concerns philosophical and literary debates in pre-revolutionary Russia (and in Berlin and Paris) between 1833 and 1866. The actual Russian revolution, of course, was another half century in the future, but that didn’t hinder discussions about liberty and censorship. Shipwreck takes place in Russia, then in Germany and France; and Salvage is set among the intellectual and revolutionary community in Paris.

The most important character in the radical/intellectual theme is Alexander Herzen, who Stoppard defines as a “would-be revolutionary,” but is an important historical figure. One of the most moving scenes in Shipwreck is about an actual shipwreck on which Herzen’s young son, Kolya, was lost. His wife is eagerly awaiting the arrival of her mother-in-law who has taken her grandson Kolya on a trip to Paris. The scene where Herzen has to tell Natalie, his wife, that Kolya is not returning, is devastating.

Stoppard was asked what inspired him to write on the subject of the Russian intellectuals and radicals. He said he was moved by the status of the critic Belinsky in Paris, “where you could write anything you wanted and no one cared” whereas in Russia, “one could only read work like this at midnight.” 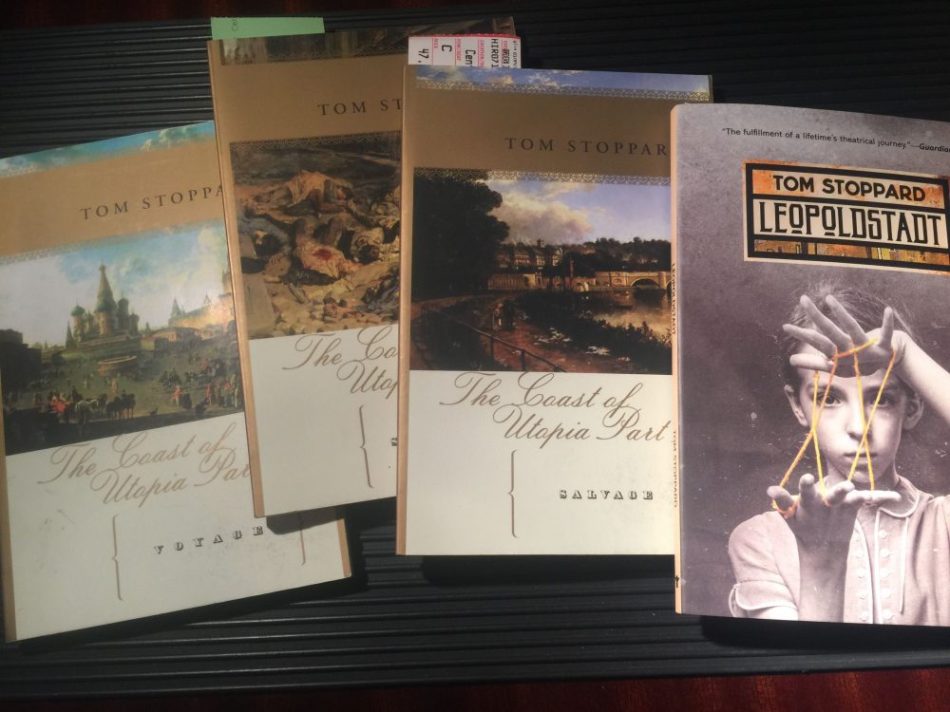 My copies of the three Utopia scripts plus Stoppard’s latest, Leopoldstadt.

Stoppard was also asked when he knew he was writing three plays. It happened when I was writing the first, he said. And commenting on his own experience working with the Lincoln Center Theaters team, that nine months “was the most binding and bonding theater I’ve ever done.”

An audience member asked Stoppard whether we can learn anything for today from his work on radicals and revolutionaries. He responded that the strongest ideas in The Coast of Utopia are about families. That is the case also in his latest play, Leopoldstadt, about a wealthy Jewish family in Vienna going through another type of wrenching political change in the first half of the 20th century. The family had escaped the pogroms in the East but the fates of the generations are impacted by communism and fascism over the years.

I recently read the script of Leopoldstadt (I had to draw a family tree chart to keep track of the family branches). So far it has been produced only in London in January 2020. Had it not been for the coronavirus, it most likely would be on stage in New York by now and scheduled for Chicago in a coming season. It is a profound and moving play with nearly 40 characters over distinct time periods from December 1899 to 1955. I look forward to seeing Leopoldstadt performed on stage, perhaps in 2022.

Near the end of the discussion, director O’Brien summed up our mutual yearning for an end to our life of physical distancing. “Here’s what the theater does. You have to be there…. You’re in a room of people who are giving their heart and soul to you. We have survived pandemics since Aeschylus and we’ll survive this.”

Update: You can now watch The Coast of Utopia discussion on YouTube but only through January 10.

This article was previously posted in Third Coast Review.