The joy of reading on the CTA

I never go anywhere without something to read. You never know when you’ll be stuck waiting for a lunch date or a movie time, for a doctor or a freight train (when I lived in DeKalb, the RR tracks crossed the intersection of two major highways). And there’s nothing nicer than sinking into a book or favorite magazine on a long bus, train or plane ride. 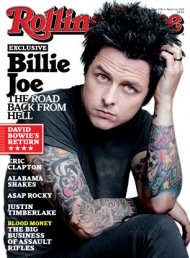 It’s fun to see what other people are reading and to wonder why they’re interested in that subject. I’ve gotten into conversations with fellow travelers about reading matter. When I was in the middle of Eric Clapton’s autobiography, I debated who is the greatest rock guitarist* with the guy sitting next to me. And today I was reading the new issue of Rolling Stone with Billie Joe Armstrong on the cover (the front man for Green Day and now out of drug rehab) and had a discussion about changes in rock and drug culture with a young woman with purple hair peeking out of the hood of her down jacket.

Let’s face it. I love my technology; my Kindle, iPad and iPhone are part of my life. I often read the Kindle while commuting because it’s smaller and lighter than the iPad and no one will want to steal it. (CTA riders have to be vigilant.) But I still prefer stashing a book or magazine in my bag – and I enjoy the vicarious thrill of seeing what other people are reading. On a morning bus, you may see students reading law or business textbooks. There’s always a dressed-for-success person reading the latest business best-seller. But the most interesting are the fiction readers. When I see someone reading a novel I enjoyed, I want to talk to him about it – but I usually don’t. On other days I’ll note that everyone sitting around me is reading an e-reader or a phone and I’m blocked from getting any insights into their literary tastes. Book covers are great views into someone’s interests. Too bad e-readers hide the cover that a book designer worked hard to create.

The anonymity of e-books isn’t a new discussion. Christopher Borrelli wrote about it in “On the ‘L,’ e-books change spy game” in the Chicago Tribune last year. This comment was intriguing: “… reading on a train or bus is what urban dwelling is about, a near perfect illustration of how living in a city often means being simultaneously public and anonymous, surrounded by strangers at exactly the moment you just want to be left alone.” You can find Borrelli’s article and a fascinating diagram that maps CTA routes to passengers’ reading habits. http://tiny.cc/zfthtw

I am totally excited about the new Jimi Hendrix album, released this week. Yes, the late Mr Hendrix, who is almost always #1 on lists of great guitarists. Not only was he great, he was left-handed! The new album is People, Hell and Angels – 12 tracks out of the Hendrix vault of officially unreleased music. (Why did it take 40+ years?) You can read about the album here. http://tiny.cc/ksshtw You can listen to one track here. http://bit.ly/14u1ySp I listened to the whole album the other day on NPR First Listen. OMG, it’s good.

Time for some upbeat news today. So here are some thoughts, reportorial and critical, of the 12-12-12 concert.

The concert was scheduled for four hours and thankfully, the producers didn’t cut it off at four.  If they had, we would have missed Billy Joel, Chris Martin, Kanye West in his leather kilt — and the final Brit of this British invasion:  Sir Paul McCartney.  But no curfew wasimposed and the concert ran almost six hours.  I was hoping for one of those all-artists-on-stage-for-a-rousing-finale finale, but that didn’t happen.  Instead, Sir Paul brought a crowd of firefighters on stage and saluted them for their heroism during Sandy. It was a fitting end for a great concert.

Bruce Springsteen led off with thematic songs rather than his big hits:  “Land of Hope and Dreams,” “Wrecking Ball” and “My City of Ruins,” the latter written about Asbury Park but highly relevant today.  Then Jon Bon Jovi joined him for a duet of “Born to Run.”  END_OF_DOCUMENT_TOKEN_TO_BE_REPLACED

On being a lefty

Yes, I am a lefty — in all ways.  My political views are generally left-wing and I’m a left-handed person.  You probably know about my political lefty-ness if you know me or have read some of my political posts on this site.  (Or if you follow me on Twitter.  And you can do that by clicking on the Twitter follow button on the right.)  But I’m also interested in aspects of left-handedness, which affects such a small proportion of the population.  About 10 percent of the world population, according to most estimates.

My leftyness is predominant but not total. I’m technically mixed-handed. I do some things with my right hand (cut with a scissors, throw a ball) but I’m left-handed for important things in life, such as writing, eating, mousing, and typing on an iPhone or iPad. If I was a guitar player, I’d play a left-handed guitar.   END_OF_DOCUMENT_TOKEN_TO_BE_REPLACED