It’s 470 miles from Chicago to Nashville, down I-65, the spine of Indiana, around Louisville and then on to Nashville. That was our road trip last week to see Bruce Springsteen at the Bridgestone Arena. It was a sold-out show with 18,000 ecstatic fans welcoming Bruce home after his years in the European and Asia Pacific wilderness.

The concert was fabulous—a 3.25 hour E Street Band performance with classics like “I’m on Fire” and “Downbound Train” and beautifully sorrowful songs like “The Wall” from the new High Hopes album. The whole horn section was up front for “Johnny 99.” I thought he was through after rousing encore versions of “Tenth Avenue Freezeout” and “Shout” and final band thanks. I was hoping for a live version of “Dream Baby Dream,” but he waved away the pump organ and played a solo acoustic “Thunder Road,” letting the crowd lead him in a singalong. A great ending.

You can read a report on the concert and see the full setlist on my favorite Springsteen site, backstreets.com. Scroll down to the Nashville report.

Update: I have to add this comment by Mosley Turner, who reviewed the April 26 Atlanta concert for Backstreets. “Bruce has received — and earned — virtually every honor and accolade there is, in addition to the unswerving loyalty of the E Street fans. This is a man with not a thing left to prove, yet he delivered a performance tonight as though everything was at stake, fully invested in every lyric and every note. While there will always be those who will say ‘you shoulda been there’ for a particular tour or some special moment, no one who sees Bruce Springsteen and the E Street Band right now could come away feeling that they did not see them at a peak in their long and storied career.”

In our 18 hours on the road, food and music were the main topics. We had live downloads of concerts from Cape Town, South Africa, and Hunter Valley, Australia, to listen to, plus E Street Radio on Sirius all the way. 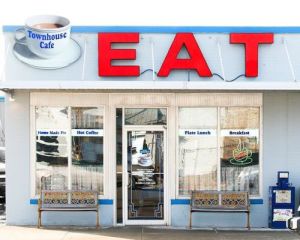 On the way south, we picked Seymour, Indiana, as our lunch stopping point as a hat-tip to John Mellencamp, who was born there. I remembered breaded pork tenderloin sandwiches from a college year in Iowa; I had recently learned they’re an Indiana favorite too. So we found the Townhouse Cafe in Seymour, a homey place said to serve the best tenderloin sandwich in Indiana. Well, it was delicious and huge and since I don’t engage in food porn, I didn’t take a photo. Our server had worked there for 20 years and I quizzed her about Mellencamp, whose framed album cover of Scarecrow was hanging over the counter. Yes, she remembered one time when he came in alone and she didn’t recognize him at first; he was a gentleman to serve and talk to.

The morning after the concert with both of us sleep-deprived, we headed north and picked up I-65. Wanting to get around Louisville before lunch, I picked New Albany, Indiana, as a lunch stop. (I lived in Louisville in the ‘80s working for KFC so the territory was familiar.) 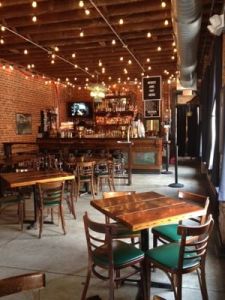 This time we were yearning for barbecue and found Feast BBQ in New Albany not too far off the highway. We skipped the bourbon and beer, their other specialties, and had amazing brisket sandwiches. Truly, it was the best smoked brisket I’ve ever had and I would go back tonight if it wasn’t a five hour drive. We talked to the owner and he divulged some secrets about how they smoke their meat. Since I’m not planning on smoking meat in my highrise apartment, I didn’t take notes.

Yes, a road trip in a fast car with great music and food stops is a good thing now and then. When I had small children, I dreaded road trips. But they’re an occasional pleasure now. I’m not ready to get back in the car yet, but I’m sure I will be, further on up the road….