Chicago in Words and Music: Kogan to Springsteen

A sunny Saturday afternoon at the Printers Row Lit Fest, now in its 30th year. At Center Stage on Dearborn Street (mercifully under a tent roof), Rick Kogan told meandering shaggy dog stories about Chicago neighborhoods, such as Uptown and Englewood. His stories were accompanied by Chicagoan (and émigré from Wales) Jon Langford on acoustic guitar. As a bonus, there were harmonica harmonies and more readings by Martin Billheimer, who often performs with Langford.

Kogan told about going to a Bruce Springsteen concert at the Uptown Theatre in 1980 (oh, how I wish I had joined him), which lasted oh, three, four or five hours—and about the 1907 opening of what became the Green Mill nightclub in 1909. He described the movie studios that opened on Argyle Street in 1907.

Kogan told stories about his father Herman (a Chicago newspaperman and city biographer) and Paddy Bauler. 43rd ward alderman and saloon keeper. Bauler is the guy who said, “Chicago ain’t ready for reform” in 1955 after Richard J Daley beat a “goo-goo” candidate (good government in Chicago parlance) to win his first term as mayor. 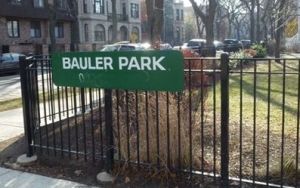 I love the fact that Bauler Park at Wisconsin and Cleveland streets in his old ward is named for Matthias “Paddy” Bauler, who served 34 years in the Chicago city council.

Langford and Billheimer played a rousing version of “The Sidewalks of Chicago” and other songs. (“Sidewalks” is a song by Dave Kirby and recorded by Merle Haggard.) Billheimer read an excerpt from an essay by the Uruguayan writer Eduardo Galeano from the compilation Armitage Avenue Fundamentalists.

Kogan also told about visiting a school in Englewood a few years ago with Matt Damon, who was recording speakers for the documentary The People Speak, narrated by the late historian Howard Zinn and based on his book, A People’s History of the United States. Here’s a video of Zinn introducing and Sandra Oh reading from Emma Goldman on patriotism.