Celebrating the life and music of Joe Hill, executed 100 years ago

Songwriter and labor activist Joe Hill was executed in Salt Lake City on November 19, 1915, framed for a crime he didn’t commit. Because he didn’t “want to be found dead in Utah,” his body was transported to Chicago by the IWW (the Industrial Workers of the World or Wobblies). His last will included the famous entreaty, “Don’t Mourn But Organize.”

Some 30,000 people viewed the funeral procession and attended the lively funeral service at the West Side auditorium (Racine and Harrison) on that November 25 (Thanksgiving Day) and his body was cremated at Graceland Cemetery. What happened to his ashes? That’s another whole story.

Chicago fans of Joe Hill, a Swedish-born itinerant laborer, celebrated the anniversary of his life and music on several occasions in November. I attended two excellent events, highlighted by great performances of Joe’s music. He wrote dozens of songs that lambasted capitalism and bosses, but his most famous lyric was “You’ll get pie in the sky when you die.”

The Hideout, a 19th century working men’s saloon on Wabansia, was standing room only the night of the main Joe Hill celebration. My Gapers Block story describes the agenda and list of speakers, which included a funeral oration by Larry Spivack of the Illinois Labor History Society and a rousing description of today’s IWW by Alison Olhava and Randall Jamrok. (The IWW is organizing successfully today, with branches at companies like Jimmy John’s, Starbucks and Pizza Hut. See their website for other industries and companies where the union is active.)

The evening started with a rousing set including “The Preacher and the Slave” by Bucky Halker and his amazing guitar, and closed with songs by a group including Jon Langford and Sally Timms of the Mekons and Martin Billheimer on accordion. Their closing number was “Workers of the World Awaken,” in which the crowd joined in. Psalm One and Fluffy performed a terrific hiphop version of Hill’s “Rebel Girl.”

A funeral march and procession closed the evening and Joe Hill’s coffin was carried outside by pallbearers and burned over a bonfire. The ashes were our burned notes describing why we believe Joe Hill lives today. Anyone who wanted to replicate the 1915 distribution of ashes had only to leave a self-addressed envelope. (In 1915, Joe’s ashes were divided up into a bunch of small envelopes with his picture on the front with the caption, “Murdered by the capitalist class.” The envelopes were given to IWW delegates and guests so Joe’s ashes could be scattered in every state except Utah and in other countries too.) 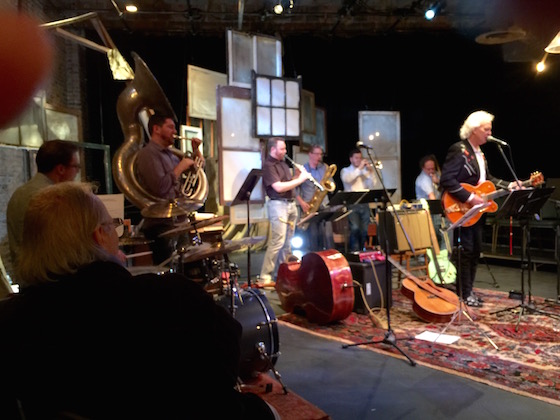 Bucky Halker, a singer-songwriter and PhD in labor history from the University of Minnesota, just released his new album, Anywhere But Utah: The Songs of Joe Hill, at an album release party at the Filament Theatre in the Six Corners neighborhood. Bucky played with the Big Shoulders Brass Band, featuring two saxophones, trumpet, tuba, trombone and drums. John Abbey sat in on upright bass on several numbers. Bucky and the band played two sets, including “Scissor Bill,” and concluded with a procession around the theater.