← We’re Having a Poetry Renaissance … and I Couldn’t Be Happier
Analog Rhapsody: An Essay on the Film California Typewriter → 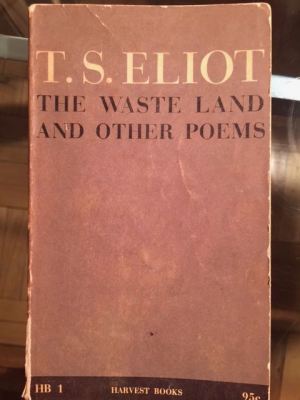 My copy of The Waste Land from my modern lit class at Mizzou.

(An homage to the St. Louis poet who became a Brit and also to Lou Rawls)

January is the cruelest month.

Where did T.S. Eliot get that April business?

January is the cruelest month, breeding

Black ice boulders out of the dead streets, mixing

Memory and desire, the memory of light,

The longing for sun, at least more of it every day.

January is the cruelest month, building

Slippy slides on the sidewalks, lurking

In wait for me to land flat

To share its light with those who wake in the dark

And work through the rare hours of sunshine.

Assuming there is any anyway.

A little life for spring.

Out of this icy rubbish? We do know

There is life to come under this ugly blackness.

I will show you how winter can be beautiful

If only the ice would melt

And we could walk happily again

On dry sidewalks, even if the temp is single digits

With a wind chill below zero.

While the Hawk blows off the lake, sending

Me on to a dead end street

Where there is nothing to stop the wind.

So they put ropes on some of the buildings to help

Us get around the corners.

January is still the cruelest month.

Despite being the wisest woman in the Midwest.

Here, said she, is your card. The frozen Phoenician sailor

Who should have known better than to go out without

Boots, hat, earmuffs, mittens and down.

Those are shells that were his ears. Look!

Here is Belladonna, the Lady of the Rocks.

I could have told her not to swim off the rocks

At Addison, when chunks of ice cover

What was once and will be again

January is the cruelest month, even if, as I,

Just not quite as much of it.

And Mr. Justice (I think), my senior year English professor at the University of Missouri, who taught me to love modern poetry and especially, T.S. Eliot.