Bingeing on Hamilton: Words and music

Huge sigh of relief. I finally finished the 800+ page biography of Alexander Hamilton by Ron Chernow. It’s the book that Lin-Manuel Miranda took on a beach vacation to Mexico. It inspired him, first of all, to write a song about our first Treasury secretary and perform it at the White House, and second, to create the Broadway extravaganza known as Hamilton: An American Musical.

In my original review of Hamilton, I predicted that Miranda would be named a MacArthur Fellow (better known as the MacArthur Genius Grant) and he was. Predicting that Hamilton will sweep the Tonys in June isn’t a very big bet.

I saw Hamilton when it opened on Broadway last September and fell madly in love with the show, with Miranda and with our ten-dollar Founding Father. Evidence of my madness?

I have a pretty good background in American history and political science, but when I saw and thought more about Hamilton, I realized that I had been living with the Jeffersonian concept of American government. Journalism students (Mizzou J-School grad here) are educated to admire Jefferson in particular because of his views of the importance of press freedom and freedom of expression, and his role in drafting the Declaration of Independence and the Constitution. I knew he owned slaves and I knew about the Sally Hemings thing, etc., but never mind. Reading the Hamilton/Federalist Party side of the story, you learn that Jefferson was a vicious opponent of Hamilton’s goals and fought for the agrarian way of life he preferred rather than the urban/mercantilist/manifacturing society that Hamilton fought for. (As an aside, Daveed Diggs is terrific as Jefferson in the Broadway cast.)

Reading Alexander Hamilton gave me a different perspective on American history and the founding decades of our country. Ron Chernow’s book, by the way, is highly readable and fascinating. If it wasn’t, I wouldn’t have read every last word and even devoured the 100 pages of notes. And Miranda’s hiphop operetta does not skimp on the details of Hamilton’s life, his brilliance and his foibles, and the controversies surrounding him. It is a full and complete lesson in American history, delivered with charm and infectious rhythm. The thing about hiphop that makes it work, Miranda says, is that it’s very dense, has more words per measure than most other forms of music. (Sort of Dylan and early Springsteen.) 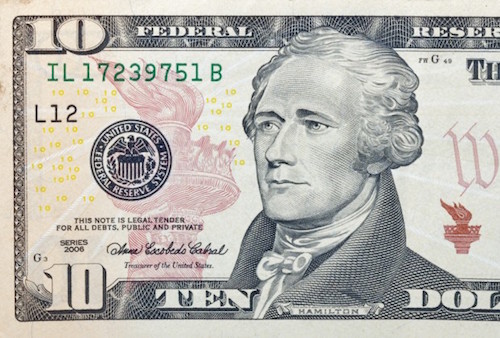 Here are a few reasons why I’m a fangirl of A-dot-Hamilton.

He was born on a small island in the Caribbean, of unmarried parents, an absent father and a mother of questionable virtue. He came to the US as a teenager and made his way through college (Kings College, now Columbia University), to George Washington’s staff, to leadership on the battlefield in the Revolutionary War, and to Washington’s cabinet.

2. He produced all kinds of firsts in the early era of this country (despite opposition at every step of the way).

He was the first Secretary of the Treasury, stabilized the economy, designed our financial system, including the National Bank, the gold-based dollar, and the Mint; he established the principle that Congress had the constitutional powers to issue currency, regulate interstate commerce, tax luxury goods such as whiskey, and enact any other laws needed to support the provisions of the Constitution.

Basically, he fought for the concept and principles of the federal government. He created the Coast Guard, the Federalist Party and its newspaper, the New York Post. He used his incredible energy and persuasive abilities to work for the passage of the US Constitution, ensuring our country became a federal government, instead of a bunch of independent states. He was firm in his abolitionist views while his southern colleagues all owned slaves.

3. He was a brilliant thinker, speaker, opinionated and prolific writer, who turned out hundreds of letters, opinion pieces and essays and wrote 51 of the 85 articles in the Federalist Papers. And he was writing by hand with a quill pen and a bottle of ink, my friends. In case you think tapping a few tweets on your smartphone is work.

He often wrote political essays under pen names such as Cato, Publius and Phocion. He was probably the first blogger. (His handle today? @publiusny.)

He founded the New York Post, a Federalist newspaper, in the days when political parties specialized in publishing diatribes against the opposition in their own newspapers.

Chernow’s description of the bitterly fought election of 1800, by the way, is insightful to read and compare with the 2016 campaign. And they didn’t even have Twitter.

By the time Hamilton reached his late 40s, he was no longer a public persona (and he missed the limelight) but was a successful and sought-after lawyer in New York.

He had always had a tenuous relationship with Aaron Burr (who advised him, according to Miranda, to “speak less and smile more”), even though they occasionally appeared to be on friendly terms. Hamilton said negative things about Burr in private on a few occasions and these eventually brought Burr to challenge him to a duel. (An affair of honor, it was called. “Demanding satisfaction” was another way to put it.)

Hamilton, at age 49, was killed by Burr in the duel on July 11, 1804, in the dueling grounds at Weehawken, New Jersey. (The same place where Hamilton’s son Philip was killed in a duel three years earlier, upholding his father’s honor.) Burr shot directly at Hamilton and Hamilton either shot in the air or his gun went off by accident when Burr’s bullet hit Hamilton in the hip, destroying his internal organs.

I’m not the only one who is bingeing on Hamilton. There’s new interest in historical sites such as the Grange, the Hamilton home north of Manhattan, and in the Hamilton burial site at Trinity Church in lower Manhattan.

Charlie Rose has featured members of the Hamilton crew several times, including this recent full-hour interview with Lin-Manuel Miranda filmed at his childhood home.

Finally, since March is Women’s History Month, I’ll close by noting that Hamilton’s exemplary wife, Eliza Schuyler Hamilton, who stuck with him through all his battles and infidelities, lived 50 years after her husband’s death and died at age 97 in 1854. She worked for causes such as the establishment of orphanages and helped her friend Dolley Madison raise funds to construct the Washington Monument. She visited the White House and never gave up trying to salvage her husband’s reputation, which was attacked by his enemies after his death. Chernow devotes the first and last chapters of his book to Eliza Hamilton.

In 2009, Miranda performed the lead song about Hamilton at the White House. He said at the time he was working on a Hamilton “concept album.”