← My theater report from Third Coast Review
2015: Not Quite a Year in Review →

Today is a sad day. On Friday I listened most of the day to WXRT playing David Bowie’s new album, Blackstar, released on his 69th birthday. Today I was thinking about getting up when the radio went on with the news that the Thin White Duke died last night. I was stunned.

I put on my Aladdin Sane earrings and got out my David Bowie albums. And I remembered the fabulous exhibit of Bowie’s life and work at the Museum of Contemporary Art in September 2014. The title was “David Bowie Is.” 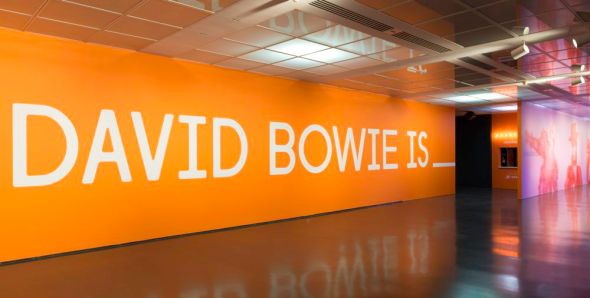 My headline was “David Bowie Is” Is Fabulous. My full review of the exhibit appeared in Gapers Block.

I wrote about how Bowie was a master of design and identity and controlled every aspect of his preparation and performance. And I noted that “David Bowie Is is not just an exhibit for fans of his music or for fans of rock and roll. It’s an exploration of history and popular culture transmuted through the vision of one artist, who probably deserves to be called a genius.”

What I didn’t mention is a key point about Bowie’s persona that is getting a lot of attention today (at least among those I hang around with on social media). He was a man of shifting identities and personas who made it possible for young people to recognize and come to terms with their roles as outsiders, others, maybe even freaks.

Ann Powers of NPR Music wrote this in her appreciation of her pop hero:  “His fans were the strange, and Bowie had finally given them a way to show it. The press called them Bowie boys and Bowie girls because there was no other name for them yet: no pansexual, no bi-curious; yes freak, but that felt like a hippie term and this wasn’t a hippie thing.”

My friend June Skinner Sawyers wrote a lovely poem this morning and we’ve posted it on Third Coast Review, the new Chicago arts and culture website, as our homage to Bowie. You can read it here.

One Comment on “David Bowie Isn’t: My homage to Ziggy Stardust”