← Celebrate the week by going to the theater: Three reviews
Brand magic – from the south side of Chicago → 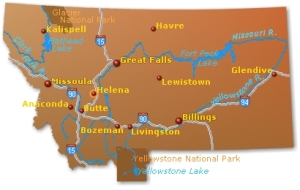 Because I’m a city girl at heart and habit, my visit to Bozeman, Montana, was probably more citified than yours might have been. Yes, there’s lot of great hiking over prairie and peak and we did some moderate walking, but most of our peripatetic adventures were city walking tours and museum treks. It was a great weekend in a university town that’s probably going to be like Boulder or Madison in another five years. The number of quirky coffee shops is a sign of things to come. (They have cold-brewed iced coffee in Bozeman!)

I lived in Colorado many years ago and have often visited Denver and Colorado Springs to visit friends and relatives and see Bruce Springsteen in concert. So I’m familiar with this part of the west. But the place I lived (Cortez, near the Four Corners) was a relatively young town whereas Bozeman has a lot of history.

We took many gorgeous mountain walks and drives, but I’ll report on the cultural highlights of a few days in southern Montana.

This district of about 260 elite homes has been listed on the National Register of Historic Places since 1897. (You can take a guided walking tour or do it yourself by installing a tour app on your smart phone.) The Bon Ton District totals about 27 blocks, with examples of Italianate, Queen Anne, Craftsman, Colonial Revival and Bungalow architecture including buildings with Eastlake features and some examples of vernacular architecture, such as pattern-book homes from the turn of the century. Most of the homes are beautifully preserved and represent elements of Bozeman’s history, including its failed effort to become the state capital. The tour takes about 90 minutes, unless your tour guide talks too much, in which case it’s two hours. 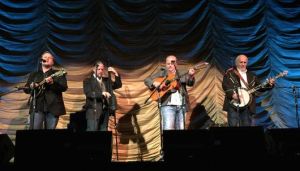 I first saw Special Consensus, a Chicago-based bluegrass band, in 1983 at my first Kentucky Fried chicken Bluegrass Music Festival in Louisville. The band members are a bit older but the music is still lively and fast as bluegrass string music should be. Banjoist and frontman Greg Cahill is the only original band member (and the only Chicagoan) still with the band. The concert was at the historic Ellen Theatre on Bozeman’s Main Street. It was a pretty traditional bluegrass concert with a nice combination of ballads, old-time bluegrass and some tracks from their new album, Scratch Gravel Road. The band’s two a cappella numbers were outstanding. You can listen to some song demos in the lower right here.

Bozeman is the home of the fascinating American Computer & Robotics Museum, which apparently came about because its founder saved everything. The museum smashes together exhibits from a human brain and a Gutenberg printing press to typewriters, adding machines, original Alan Turing papers, punch cards (and their antecedent, the 1801 Jacquard punch cards for textile manufacturing) and the first neural computer. There’s also the latest in smartphone, robots and artificial intelligence devices. And a 1984 Macintosh like my very first.

The exhibits create a timeline of developments in computing and communications over the centuries. The museum, founded in 1990, was developed by and apparently based on the collections of Barbara and George Keremedjiev. They originally intended to locate the museum in Princeton, New Jersey, but changed their minds when they moved to Bozeman. The museum’s Wikipedia page is much more informative about the museum than its own website. 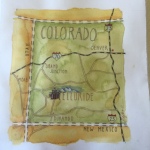 One day we visited Daphne Gillam, an artist who creates beautiful illustrative maps, at her home in the Shields River Valley. I was eager to see how she creates these maps and expected to see her sitting in front of a giant LCD screen. Instead, she is working on a piece of linen-finish paper taped to her desk top, painting with a well-used set of water colors and brushes, both medium and fine. You can see a gallery of her maps on her website, where she also describes the process she goes through when creating a map for a client, which is often a publisher.

Livingston is a small town in the mountains near the Yellowstone River. It’s best known as the location of a museum created from a Northern Pacific Railroad depot built in 1902 as the original access to Yellowstone National Park. Passenger service ended in 1979 and in 1987 the city opened it as a museum to preserve Livingston’s railroad past.

Architects Reed and Stem, who were part of the design team for Grand Central Station in New York, designed the building. The exterior is notable for its terra cotta ornament and the interior for its beautiful wood and terrazzo. The exhibits illustrate how the railroad was built and maintained, how steam engines were serviced in the roundhouse, and how the railroad was run from the yard office, complete with tools and papers of the time. One exhibit demonstrates how the telegraph office worked and you can pretend to send your own dots and dashes.

An exhibit of paintings—Train in Art—was on display at the museum. The works were by two artists and I was particularly taken by the paintings by Sheila Hrasky (in the slideshow above).

After visiting the museum, we had dinner at a café in the historic Murray Hotel and then went to a play at the Blue Slipper Theatre in the historic district. The venue was pleasant and included an upstairs parlor where refreshments were served during intermission. The play, unfortunately, was forgettable. 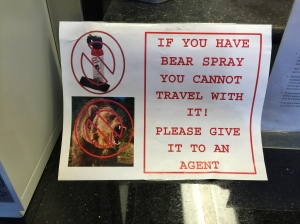 When I checked in at the Bozeman airport for an early flight to Chicago, I was confronted by this warning, a sign I never have seen at O’Hare or LaGuardia. Must be lots of bears in Bozeman.