This week this cineaste* had two outstanding film experiences. One was with one of my favorite filmmakers and the other was a Halloween horror story.

* Michael Phillips called himself a cineaste in the Tribune today, so I can too. That’s a little more pretentious that calling yourself a cinephile or movie nut, but I like it.

Wednesday night Canadian filmmaker Guy Maddin was at the MCA theater in a Chicago Humanities Festival event. The packed house of film students and film fans hung on his every word and appreciated his frankness and engaging humor. I have loved his bizarre films since I first saw The Saddest Music in the World. The chance to see him in person was impossible to resist. 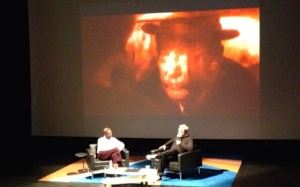 Coleman and Maddin at the MCA. Photo by Nancy Bishop.

Maddin is probably best known for two films, The Saddest Music in the World (2003), a Depression-era story about a beer baroness with glass legs played by Isabella Rossellini, and My Winnipeg (2009), an homage and “surrealist mockumentary” to his hometown. He also has made many short films and creates film installations.

As I said in my Gapers Block article, Maddin looked like a perfectly normal and sane person, but I hoped that didn’t mean we were in for a quiet evening of intelligent discussion. Then Maddin said his major film influences were David Lynch and Luis Bunuel and my brain exploded. Bunuel, the Spanish surrealist, is one of my favorite filmmakers. In fact, I’m going to lead a discussion on his work for my film group next month. I have recently rewatched a lot of David Lynch films, including Eraserhead and Blue Velvet. The Bunuel/Lynch combination is mind-bending.

Maddin talked nonstop and was sort of interviewed by Charles Coleman from Facets. The conversation veered all over Maddin’s personal bio and film viewing and film making habits. He’s a great fan of silent films and is committed to saving or recreating lost films. Coleman showed two of Maddin’s short films, including The Heart of the World. See my Gapers Block article for more about Maddin and his work.

Maddin said he’s now reading Greek tragedies, which he thought would be boring … “but they’re like Mexican comic books!” He also lately has become obsessed with Herman Melville’s Moby Dick. (Aren’t we all?)

Confession of a diarist

I went to see Guy Maddin because I like his work. I had no intention of writing about it. (Except when you’re a diarist or blogger, all of life is raw material.) I’ve been to a couple of author events lately that I fully intended to write about and the authors said nothing of interest. (I’m talking to you, Junot Diaz. And you, Thomas Dyja and Neil Steinberg.) But Maddin started strong and never stopped. I have 12 pages of scribbled notes in my notebook and I could hardly keep up with him. The evening was exhilarating.

It was Halloween night at the Symphony Center. The audience was a little different than the everyday CSO audience. Many were in costumes and weird makeup. Many were not. I wore my everyday costume of jeans and a Springsteen shirt.

The CSO was hosting one of its special movie night concerts. The film was Robert Wiene’s 1920 film, The Cabinet of Dr Caligari, with site-specific music performed by the punky organist Cameron Carpenter. He played a stirring score on a massive digital organ set center stage under the giant movie screen. Carpenter says he is the first concert organist to prefer the digital organ to the pipe organ. His touring instrument is a “monumental cross-genre organ” built to his own design specs.

The film, which I’ve seen several times in the past, was a marvel to see on the big screen. It’s dazzlingly expressionistic with jagged lines, angled shapes, trees with spiky leaves, tilted walls and windows. It’s black and white, of course, but tints suggest daytime or night. The distorted sets are obviously two-dimensional, rather than real sets, but the effects are remarkable for the time.

The Dr Caligari story is about madmen and murder, delusions and deception. The expressionistic visual style surely paved the way for films like Metropolis, Nosferatu and M and inspired filmmakers like Fritz Lang and F W Murnau.

There must be different cuts of the film because its length is variously listed from 50 to 67 minutes. The CSO version was about 65 minutes. This version of the film on YouTube is 51 minutes.

In researching this, I also found a valuable archive of silent films in the public domain. Check out some you’re familiar with and find new ones, maybe even some of Guy Maddin’s lost films.

You can sign up to follow Nancy Bishop’s Journal by putting your email address in at the top of the right hand column. You’ll get an email when I post a new article, usually about once a week. No spam, no passwords.