← Art that mystifies and moves: Magritte, Koudelka and Paschke
Hanging out at O’Neill’s: Long Day’s Journey at the Critics Institute →

That’s my week: The Jungle + Boyhood

On two consecutive days last weekend, I had the good fortune to be in the right place for amazing dramatic experiences. You’ve probably read a lot about one—Richard Linklater’s film, Boyhood. But probably not much about the other. Both are exceptional works.

The Jungle at Oracle Theatre 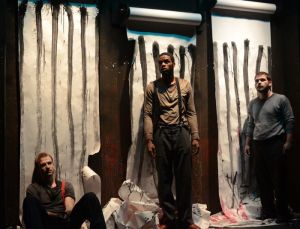 Matt Foss’ play is adapted from Upton Sinclair’s novel, The Jungle. It’s set in Chicago in 1906 and focuses on the immigrant families who came here to find jobs and a better life than they could hope for in their European homelands. They found work—and a good deal more—in Chicago’s stockyards. Sinclair’s book, while focusing on the grim lives led by these immigrants, also described the conditions of the stockyards in gruesome detail. To his chagrin, it was the stockyard images that people focused on…possibly because they were appalled to think that was where their meat came from. Like other muckrakers of the time, he hoped to focus public attention on the needs of the people and bring about government action for change.

Oracle Theatre is presenting the world premiere of this play, directed by Foss, who also developed the ingenious stage design that I describe in my Gapers Block review.  The play is 100 minutes and will remind you why Chicago theater is great. In your face? Yes. Focused on a message? Absolutely. And tragically, exuberantly dramatic.

Oracle Theatre is committed to free art for all and so their tickets are free (but you should reserve a seat). I write a little about their business model at the end of my review. So far, they seem to be operating successfully with no “earned income.” They deserve your support, not because they’re free, but because they tell great stories. 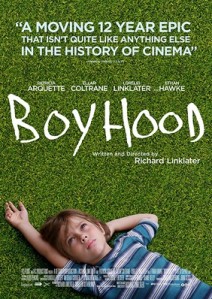 This film is having a gradual nationwide rollout, and Chicago is in the first wave of releases. You can see this beautiful film at River East 21 or Landmark Century Centre right now. Here’s what I said in my brief Letterboxd review:

Boyhood is a beautifully edited story of a boy growing into a young man. That’s all. Just life, compressed into 164 minutes. The transitions of age and family change are done so smoothly that sometimes you miss them. The film is rich in conversation (that often seems improvised, although it isn’t) about life, its meaning and potential. Linklater’s felicitous choice of a 6-year-old boy who would continue to be interesting for the next 12 years is amazing. Patricia Arquette and Ethan Hawke, the boy’s divorced parents, also change over the years; they both give terrific performances.

Nancy Bishop’s Journal is two years old. It’s amazing to me that I’ve continued to write regularly and at length about the things I love: Theater, film, books, music, art and design, Chicago stuff, and sometimes food. My total is 120 posts since July 2012.

I’m also writing regularly at gapersblock.com/ac/, where I’ve written 113 posts in the last 15 months—reviews of theater, art, architecture and design. You also can find my writing at culturevulture.net, an online arts magazine, where I review theater and other Chicago culture, and at theandygram.com, where I post new Chicago theater reviews.

Nancy Bishop’s Journal is two years old. It’s amazing to me that I’ve continued to write regularly and at length about the things I love: Theater, film, books, music, art and design, and sometimes food. My total is 120 posts since July 2012.

2 Comments on “That’s my week: The Jungle + Boyhood”