Three important exhibits this summer are threading art, fashion and social issues into fascinating museum experiences. I keep trying to decide that one or another is my favorite but each one is equally discerning and compelling in its own way.

I wrote recently about seeing the exhibit Punk: Chaos to Couture at the Metropolitan Museum of Art in New York. Of course, I’m tempted to say this is my favorite of the three because I love punk rock and its alienated, disruptive, DIY and disheveled nature. Punk, especially Brit punk, was critiquing the evils of society in the 1970s—the ones that we see even more vividly today. Poverty, economic and educational inequality, and the evils of the establishment.

Most especially, one of my favorite bands of all time, The Clash, is represented in the exhibit by a quote from its late lamented frontman Joe Strummer, explaining what the band wore: “We didn’t have the backing of the Sex boutique (like the Sex Pistols) so we rented a warehouse in Camden Town and painted it. We got all covered in paint….”

Some of my favorite things about the exhibit were the facsimile of the bathroom at CBGB, the famous punk club on the Bowery; and the DIY Bricolage section, which used trash materials in costuming. The exhibit was intended as an immersive experience with almost-loud music, music videos and other multimedia examples of the period. (Photo copyright Metropolitan Museum of Art.)

From punk to Paris

Impressionism, Fashion and Modernity at the Art Institute of Chicago is an elegant tour of the fashions and social customs of the late 19th century as displayed in impressionist paintings from the collections of the Art Institute, the Metropolitan Museum and Musée d’Orsay in Paris, the three museums that organized the exhibit. The exhibit is highlighted with gowns similar to those worn in the paintings displayed and properly accessorized with footwear, gloves and chapeaus. The exhibit takes us from the elaborate, fussy, long-trained gowns that required corsets and cautious walking to day gowns and walking ensembles that freed the 19th-century woman from some of the strictures of corset, bustle and fabric. (Photo courtesy Art Institute of Chicago.) 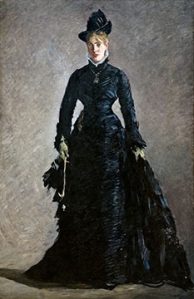 Museum legends and signage describe the changes in styles and social customs that accompanied and, indeed, enabled the fashion changes. Other displays show period examples of accessories such as fans, lorgnettes, jewelry, hats and footwear.

We can also see examples of fashion magazines and catalogs with announcements of the openings of important new fashion emporiums in Paris, including Le Bon Marché, La Samaritaine and Printemps.

The Art Institute has an ongoing series of lectures (some are members-only) about the exhibit and the period. They are free and provide invaluable insights to enhance your enjoyment of the exhibit. See the Art Institute calendar for information.

Chicago has another stunning exhibit of art and fashion at the Chicago History Museum. Inspiring Beauty: 50 Years of the Ebony Fashion Fair runs until January 5, 2014.

I reviewed this exhibit for Gapers Block and you can read my article here. The exhibit is a gorgeous display of almost 70 of the 8,000 gowns and ensembles from the costume collection of the Johnson Publishing Company.

It’s a stunning exhibit of fashion and history and shows how the fashion fair recognized and encouraged changes in socioeconomic and elite status for African-American women. The fashion fair was produced and directed by Eunice Johnson, whose husband was John H Johnson, the visionary founder of Johnson Publishing, publisher of Ebony and Jet magazines.

The exhibit shows the original garments by designers such as Yves St. Laurent, Oscar de la Renta, Pierre Cardin, Emanuel Ungaro, Christian Lacroix, and Patrick Kelly, on stunning African-American mannequins. The garments are sleek, dramatic, vibrantly colorful and often exotic. The exhibit also tells the story of Eunice Johnson’s persistence in gaining access to the fashions she wanted to show (cash helps) and how she brought high fashion events to African-American audiences. More than 5,000 fashion shows in 180 cities all over the US were produced as charitable events, raising more than $55 million for civil rights projects and scholarships.

While you’re at the history museum, you can also still see the Vivian Maier exhibit that I wrote about here. It runs through January 5, 2014.