← Live or Memorex?
Thinking of the Jersey Shore →

Counting Psychopaths (Seven of them)

However, it’s McDonagh’s films that are astounding. His new film, Seven Psychopaths, is brilliantly and hilariously funny, dark, quirky, bloody and violent, with more plot twists and turns than I can possibly detail here. It’s a movie about a movie and the movie business. While it’s not perfect, I guarantee you will like it, as long as blood and violence don’t bother you. (It’s that fakey Tarantino-esque violence that you also see in The Sopranos.) 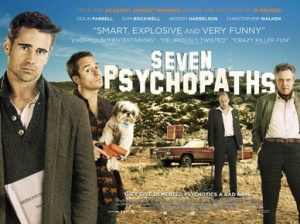 The casting is brilliant.  Colin Farrell as an alcoholic film writer with writer’s block.  Sam Rockwell as his buddy and mastermind of the dognapping business.  (I know, I know. Bear with me here.) Christopher Walken is inventive, funny and poignant. Woody Harrelson is a gangster who loves his missing shih-tzu. Tom Waits is a serial killer with a bad hairpiece and a rabbit. And I haven’t listed all the psychopaths yet. Let me say, for you animal lovers, that all the blood and violence is committed on humans. No animals are even touched. Although Bonny, the shih-tzu, comes close.

Seven Psychopaths is so good, I will see it again.  And again.  McDonagh’s earlier film, In Bruges, is equally good, but has a more linear plot structure. I think I want to see it again too.