← Can creepy be high quality?
Me and the Spanish Civil War →

Some performers keep doing the same thing for decades. They relive their past successes over and over again, to the delight of their longtime fans, who only want to hear the old favorites.  Some performers (and fans) are more adventurous. They constantly develop new music, perform in new formats with new bands, and even reformulate their past catalog to the point of unrecognizability.

Bruce Springsteen is in that latter category. He plays with new bands, in new musical genres, and constantly writes new material and revamps old. And so is David Byrne. The frontman for the late great Talking Heads is a curious, creative, ingenious performer who seems to enjoy playing with new material. He has proselytized for bicycling in cities all over the world (including via his book Bicycle Diaries) and even turned a building into a musical instrument. http://tiny.cc/aggglw 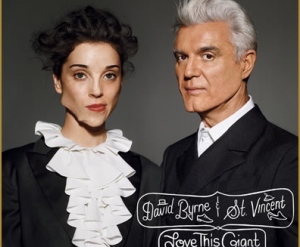 His recent concert with St Vincent (Annie Clark) at the Chicago Theater was an engaging showcase for Byrne’s reinvention. Covering mostly songs from their new album, Love This Giant, the two singers were joined by a band made up of eight horns, keyboards and percussion. The horns included trombones, trumpets, saxophones, tuba, French horn, clarinet and an occasional flute. I love horns so this made for a very happy sound. Furthermore, the horns didn’t just sit in one place and behave, as they do in most bands. No, they danced, marched, followed or led the singers, and occasionally lay down on the stage to play.  Every song was choreographed like a dance performance with flashing colored spots and shadows projected against the back wall.  Byrne danced around in the skittery-jittery, herky-jerky movements that I remember from the concert film Stop Making Sense.

Byrne himself often played background singer among the horns as St Vincent took the main mic. I would have liked to see more of Byrne playing frontman but they did make Talking Heads fans happy with great renditions of “Burning Down the House” and “This Must Be the Place (Naïve Melody).” I would have liked to hear a duet of “Heaven” from the Talking Heads album, Fear of Music. Maybe next time.

David Byrne, who has been called “rock’s renaissance man,” is also a writer with several published books. His newest is titled How Music Works. He is a thoughtful commenter on the music business as well. Commenting on changes in the industry in 2007, he said, “Luckily, music remains more or less unaffected — there is a lot of great music out there. A new model will emerge that includes rather than sues its own customers, that realizes that music is not a product in the sense of being a thing — it’s closer to fashion, in that for music fans it tells them and their friends who they are, what they feel passionately about and to some extent what makes life fun and interesting. It’s about a sense of community — a song ties a whole invisible disparate community together. It’s not about selling the (often) shattered plastic case CDs used to come in.” (David Byrne Wikipedia page, retrieved 07/19/12.)