The Rock and Roll Escape Route

Rock and roll is a vibrant, dynamic art form in all its permutations from classic, punk, metal and alt to roots and country (and hundreds more*). Rock and roll emerged in the 1950s from popular music forms such as blues, R&B, country and rockabilly; it has grown to dominate popular music sales (now downloads), and live music performances to become a ~$67 billion industry globally. While the death of rock is often predicted, it continues to thrive as young musicians join the industry veterans, now in their 60s and 70s and still recording and touring.

What keeps rock vibrant and dynamic, I believe, is that it is an escape route for young musicians, usually male, from the humdrum lives their parents and peers settle for. This is a socioeconomic story as much as a rock and roll story.  END_OF_DOCUMENT_TOKEN_TO_BE_REPLACED

Jersey Boys: It could have been a rock and roll joy ride

At this moment, I’m sitting in the Providence airport, waiting for my delayed flight home after spending two weeks on the shore in Connecticut. That’s why I haven’t posted anything recently at Nancy’s Journal. While I was there, I saw and reviewed Clint Eastwood’s film Jersey Boys, an adaptation of the smash hit stage musical.  The film is showing on some Chicago screens, and here’s my review.

Jersey Boys is a jukebox musical about kids who found a way out of their deadend lives through music: a rock and roll escape route. The 1950s and ‘60s pop music of Frankie Valli and the Four Seasons—with songs like “Sherry” and “Big Girls Don’t Cry”—makes this otherwise mediocre film a pleasurable musical experience.

Jersey Boys tells the story in semi-documentary style of the kids who grew up on the streets of New Jersey in towns like Newark and Belleville. There was no way out of the deadend lives their parents lived as barbers, laborers or tradesmen—unless you hooked up with the mob or became a superstar. Becoming the next Frank Sinatra was every Jersey boy’s dream in the 1950s.

Tommy DeVito (Vincent Piazza) forms a trio (between prison stints) but the band is going nowhere, playing small clubs and banquet halls. They need a strong lead singer. Tommy finds Frankie Castelluccio (John Lloyd Young), who has a powerful falsetto voice, and asks him to join the band. Nick Massi (Michael Lomenda), the bass player, rounds out the quartet.

The group plays under different names, including The Four Lovers and The Romans, but their career still flounders—until they meet Bob Gaudio (Erich Bergen), the songwriter and keyboard player they need. The boys rename themselves The Four Seasons.

Desperate for a record contract, they meet Bob Crewe (Mike Doyle), a producer at the iconic Brill Building, where so many recording careers start. Tommy, who considers himself the band’s business manager, uses some sketchy connections to borrow the money they need for a recording session. They get help from their consigliore, Gyp DeCarlo (the marvelously eccentric Christopher Walken) and their first records are produced. 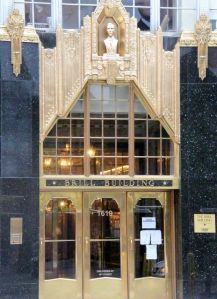 “Sherry” is their first #1 single, followed by several more million-selling hits. Frankie Valli (who has now changed his name) and the Four Seasons play big-time clubs and venues and appear on the Ed Sullivan Show.

The boys think they are rich, but all is not well on the business front. They’ve made the mistake of letting Tommy manage the band with no advisers paying attention to the contracts they sign. (Or don’t sign. The “New Jersey contract” is a handshake.)

The Four Seasons took the same path followed by many young musicians in the days before they learned they needed lawyers and business managers who worked for them. The Chess brothers in Chicago lured Mississippi bluesmen Muddy Waters and Howlin’ Wolf to sign contracts that gave them fancy cars and minimal royalties. (Hence, the nickname for Chess Records was Cadillac Records.) Young musicians like the Beatles in the 1960s and Bruce Springsteen in the 1970s were taken advantage of by their managers, earned modest record incomes, and lost the publishing rights to their own music for decades.

Despite their recording success, the Four Seasons split up when Gaudio and Valli decide they can make more progress and better creative decisions on their own. (They formed the Four Seasons Partnership, which still controls the assets of the band.)

Family traumas and tragedies fill out the story of the band and its music. In one final scene, we see Frankie Valli and the Four Seasons (aged, in badly done makeup), reunited in 1990 for their induction into the Rock and Roll Hall of Fame.

As the film credits roll, the band members and entire cast engage in a street dancing scene, including faux curtain calls.

Director Clint Eastwood has chosen to give the film a look of faded glitter and glamour and the acting doesn’t add to the luster of the film. John Lloyd Young as Valli is wooden and generally expressionless. Piazza is livelier as Tommy and makes you believe that he might be able to talk himself out of trouble. Bergen’s Gaudio character is at first quiet and serious as a musician and he was probably the most intelligent of the four—and proved it by engineering the split and partnership with Valli.

Valli and Gaudio are among the executive producers of Jersey Boys and are reported to have had total control over the film. But they’re musicians. How could they forget to do a sound check? The sound quality of the film is below average and that spoils its best feature.

Still, the 2.25 hour film is worth seeing if you want to listen to the jukebox of the 1960s. As a rock and roll escape route, Jersey Boys can’t find its way down the New Jersey turnpike.

Not Fade Away: Soundtrack of the ‘60s

I don’t like musicals, on stage or film. I dislike them because they take a perfectly good drama and add egregious singing and dancing that does little to advance the story or explore the characters. (Like James Joyce’s The Dead on stage or Light in the Piazza.) So I won’t be seeing or reviewing Les Miserables (I suggest Victor Hugo’s book instead). But I’m excited about a new film with music titled Not Fade Away — a rock and roll film set in the 1960s.

As one reviewer said, a great movie is always about more than what it’s about.* Not Fade Away is written and directed by David Chase in his first project since The Sopranos. Chase clearly loves this music. His film is about kids who want to be rock and roll stars. And it has lots of music. Constant music, in fact. But don’t call it a jukebox movie. It’s far more than that. It’s an exploration of the cultural upheaval of the ‘60s – in music, TV, film and politics. And it’s another chapter in the story I started to tell in my earlier essay, The Rock and Roll Escape Route. Rock and roll has often been an escape for teenagers who perceive their families living dreary, ordinary lives that they do not want to repeat.

In Not Fade Away, Doug, an Italian-American kid in New Jersey, and his friends form a band; practice in a family garage, and play teenage gigs. Doug starts on drums and turns out to be a pretty good lead singer. They produce a demo tape and make a contact with a record producer, who outlines for them all the practicing and performing they need to do before they will be ready to audition for a record contract.

There are several subplots, including Doug’s relationship with his father (played by James Gandolfini) who doesn’t understand Doug’s dreams, his long hair or his dress. The romantic subplot involves Grace, a girl from a wealthy family, and includes an unnecessarily complicated subplot about her sister, who suffers mental illness. The band members are unknown actors and do a credible job with the music.

The classic film plot of birth/failure/success is turned on its head by Chase. The story progresses as the band changes character and eventually Doug leaves. The film ends — with Doug in Los Angeles — in a fanciful but ambiguous street scene. (You’ll remember that The Sopranos finale drove many fans crazy. Love ambiguity, I say.)

There’s not a moment in the film where we don’t hear music; the soundtrack is killer. Steve Van Zandt of the E Street Band was the music supervisor and embroiders a masterful rock and roll sound track. Interestingly, the song “Not Fade Away,” written by Buddy Holly and covered by dozens of musicians, is not played in the film. If you’re a music fan, stay and watch all the credits. (Of course, if you’re a real movie fan, you do that anyway.)